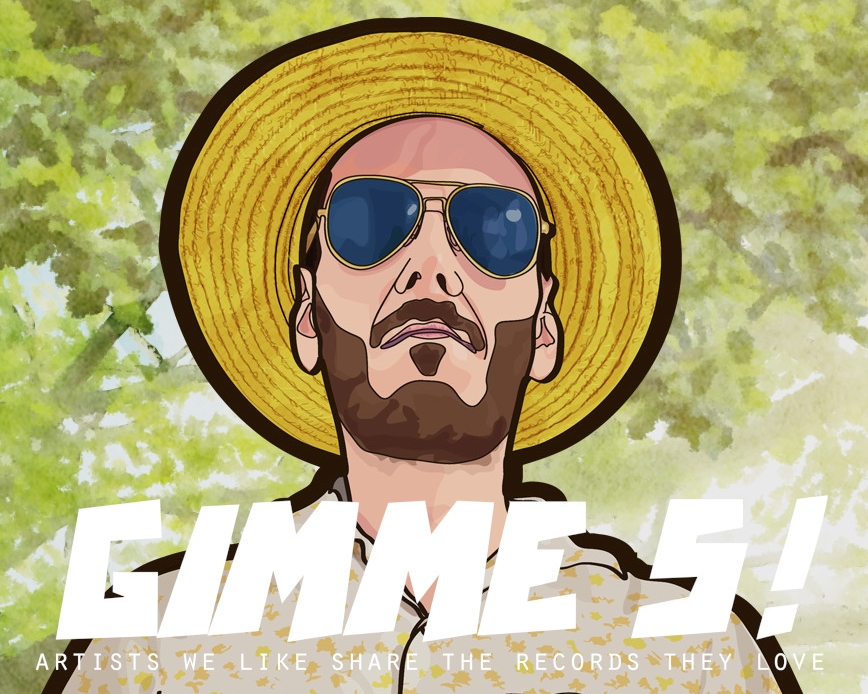 Thomas Edward Yates aka T.E. Yates is a gifted multi-disciplinary artist – singer-songwriter, multi-instrumentalist, illustrator, animator – based in Bristol (UK). After a single in 2012 and an EP in 2013, he released his debut full-length Silver Coins and White Feathers (Debt Records) in 2017, followed by the EP Strange Weather (self-released, self-designed) late last year, with six songs from the same recording sessions. It’s richly orchestrated indie folk, with a well-thought-out structure and beautiful, sincere vocals. The video for Condition showcases Yates’ qualities as musician and creator, but Palace of Your Master is his personal favorite (for me Jack of All Trades is the track that stands out – just saying).

Given his versatility, we wondered what Tom’s influences are. He was kind enough to provide his response in some interesting stories.

Gimme 5! T.E. Yates Shares 5 Albums He Listened To During His Most Prolific Phase As A SongwriterRead More »

Tom Brown makes up half of Rural France, who last year released a quality record full of ’60s pop disguised as ’90s slacker indie rock. One of the songs on that record was called Teenage Tom Petty, and its plural is the name of Brown’s latest project. Under the moniker Teenage Tom Petties, Brown filled his Eastpak with his favorite ’90s slacker indie rock CDs, his ’80s underground pop 45’s, and some classic punk LP’s. He also took some primitive recording device along for the ride. Brown than recorded the eight songs that make up his self-titled solo debut in an abandoned shed somewhere around Wiltshire, all in one frantic and inspired take.

None of this is true (or is it?), but it’s how I like to imagine the birth of Teenage Tom Petties. Tom Brown banging away on his instrument, letting those creative juices flow, aiming for spontaneity and melody rather than polished perfection. I’d say mission accomplished. Play this one front-to-back. Repeat. What a blast!

Explorers is L’Resorts follow up toVacation (2021), and if those names alone don’t bring a positive mood, wait until you hear the music. L’Resorts is the musical project of love interests Martha Cannon (Lady Cannon) and Vincent Kircher (Jaill) who draw influences from Velvet Underground, Camera Obscura, ’60s pop, folk and country. The result is a playful folky take on indiepop that has a strong country feel in part due to the vocal performances of Cannon and Kircher.

If you have time for just one song today, I strongly recommend Blasting Off or Pieces Of My Love, arguably the most sunny and upbeat sounding songs on Explorers. Better yet, join L’Resorts on all of their explorations, and let their generous and gorgeous melodies wash all over you.

Countless books have been written about love, but rarely as melodic as English singer-songwriter / DIY musician Julian Pugsley aka Bernard Blake has now. The Book on Love, his new album under the moniker of Blake, contains eleven songs that keep on misleading you without feeling cheated. “I very slowly started writing lines // And I learned from the very best // My parents told me I was wasting time // So I knew I was passing the test”, he explains beautifully in standout track Lost Ground . I assume he’s referring to the great folk artists of the 70s, because that’s where the roots of Blake’s music lie. He does give it his own twist though, each chapter has a different sound, tempo and gear, without losing sight of the bigger picture. Sometimes rocking, sometimes meandering, sometimes waltzing, etc., always providing a familiar but fresh and optimistic look. In every way it has been worth the effort: this is a book we’ll be opening up more often, if only for memorable phrases like “If we surrender what’s the cost // If the fighting stops we’ll see exactly what we’ve lost” (from the title track). Whether you like to read or not, listening is a pleasure.

The Book on Love is out now digitally and on CD through Subjangle. Add to wantlist: Bandcamp

In May we saw A Tribute to Jawbreaker’s Dear You collection (Sell The Heart Records subscriber exclusive), The Black Crowes’ 1972 EP (Amazon exclusive), Todo Muere SBXV (artists from the Sacred Bones roster covering their favourite tunes), Sarah Brown singing Mahalia Jackson and the Nitty Gritty Dirt Band doing Bob Dylan, the previously announced Coverama compilation, Lester Greenowski tackling the discography of Kiss on Kover All Over and various ladies performing songs of The Boss, Bryan Ferry’s smooth Love Letters EP, and nice releases from The Soul Jacket, R.E. Seraphin, Ditches, Zeno Jones, Walker Brigade, Praise, The Christian Family and Rat Tamango with some successful cover versions. And there was a lot more, but below you hear the 10 best that we haven’t mentioned yet.

It’s Raining || Cover: JD McPherson || Original: Irma Thomas
American singer-songwriter/guitarist JD McPherson’s released The Warm Covers EP, Vol. 2, a great sequel to his 2014 cover collection (the new 5-track EP is out now digitally through New West Records, a physical edition including additional bonus tracks will follow sometime in 2023). The obvious choice here would be his interpretation of a song originally performed by Iggy Pop or Pixies, but thanks in part to It’s Rainin’ (4am) by Bob Forrest’s The Bicycle Thief, I don’t miss a chance to listen to this Irma Thomas classic. Heartfelt rhythm ‘n’ blues the way it’s meant to be.

The Add To Wantlist crew had the pleasure of seeing the likeable Rotterdam indie quartet Elephant play a festival show yesterday, the day their debut full-length Big Thing was released. We concluded that “Elegant” would have been a more appropriate band name, because Frank Schalkwijk (vocals, guitar), Michael Broekhuizen (vocals, guitar), Bas Vosselman (vocals, bass) and Kaj van Driel (drums) don’t do heavy stompers – no, this is all about graceful melodies. The LP contains ten summery, dreamy indie-folk songs with a warm, melancholic sound – let’s thank Pablo van de Poel (DeWolff) for his studio work – and strong vocal harmonies. The lyrics are relatable, but seem unadorned at first hearing – on a second listen though, you’ll hear that the instruments, especially the tantalizing lead guitar, tell a more extensive story, with exciting exaggerations and juicy details. It ensures that you can’t overlook Elephant and this pretty good (and elegant) album – a big thing indeed.

Big Thing is out now on CD and vinyl LP through Excelsior Recordings.

Teen Jesus and the Jean Teasers. Try repeating that name a couple of times quickly and you are likely to drop the ball. That’s not the case for the band who, like the title of their debut EP correctly implies, are indeed Pretty Good , or any new band for that matter. The title of the EP of course is meant sarcastically and a response to mansplainers coming up to the band with unsollicited offers for help and cringeworthy comments about not being too bad for a bunch of girls.

The four Australian women in Teen Jesus and the Jean Teasers are young, but their sound oozes nostalgia for the altpop and grunge of the previous century. They channel that nostalgia and put their own contemporary indiepunk spin on it. Songs like Miss Your Birthday, AHHHH! are extremely fun, and I can see this band creating some serious waves in the global pop scene in the coming years.

Pretty Good For A Girl Band is out now on Domestic la la.
Add to wantlist: Bandcamp

London-based singer-songwriter Gabi Garbutt and her band The Illuminations – Ollie Jones (drums), Jimi Scandal (guitar), Dan Fatel (bass), and Ted Mitchell (keys, sax) – are back with their sophomore full-length Cockerel. It has ten beautiful and diverse songs – file under “soulful indie folk with a punk edge” – in which the poetic lyrics and sincere vocals are central, which come into their own thanks to the convincing work of the skilled musicians. One minute the sound is orchestral, then you hear a guitar solo that is impossible to escape from, the next moment a saxophone grabs your attention, the next moment there’s a fragile piano that emphasizes the story, and so on, and it all works well. What’s happening here is special in every way, a triumph.

Cockerel is out now digitally, on CD and vinyl LP through Trapped Animal Records.

Slovenia and Poland are not at the top of my list of countries I asssociate with sunshine pop, but perhaps I should recalibrate. Meet Buddhist Bubblegum, a project by Wiktor Szotowski – a Polish emigrant now based in the capital of Slovenia, Ljubljana. His most recent release is a split with Wiggly, a pseudonym for “an eclectic, freewheeling singer” songwriter form the US state of Missouri. More than each artist simply contributing songs to the split, Dreaming Of The Desert is a collaboration, with Wiggly providing lyrics to one of the Buddhist Bubblegum songs (Summertime), and Buddhist Bubblegum covering a Wiggly original (Stationary Weathervane).

The Wiggly side of Dreaming Of The Desert challenges my comfort zone, but I’m fascinated. Wiggly’s music is all over the place, and experimental folk is probably the easiest way to describe it. The acoustic guitar is joined by all kinds of soundscapes and quirky instrumentations. Quite mesmerizing.

The Buddhist Bubblegum side though, that’s where I feel right at home. Szotowski puts his own spin on ’60s pop with Buddhist Bubblegum, combining sugary sweet melodies with fuzzy and jangly guitars – and steady upbeat drumming by Maks Rozman of the Slovenian pop groups Regen and Masaž. Remember The Brother Kite? That’s the first reference that came to mind. Or if you don’t know that band, Buddhist Bubblegum kinda is like a blend of Nada Surf and The Resonars. It’s perfect music to accompany you on your ride to your early morning surf sessions. Or perfect music for your commute. Or for your work-from-home sessions. Or your bike ride. I guess what I’m trying to say is, listening to Buddhist Bubblegum will make any day more enjoyable.

Dreaming Of The Desert is out now on CD at New Jersey label Cavern Brew Records.

In the period when The Limiñanas couldn’t satisfy my hunger for good French garage psych on their own, I found a welcome and extensive dessert in Marie Mathématique’s debut album Tous Vos Lendemains Dès Aujourd’hui (2016), one that I still consume regularly (watch the Sous Mon Second Soleil video for an energy boost). The follow-up Nos Jours Étranges (translated: Our Strange Days), just released, is once again both idiosyncratic and very tasty.

Marie Mathématique is the duo Emmanuelle Kawalek-Mazel and Nicolas Mazel, who took their band name from Jean-Claude Forest‘s fictional animation character, broadcasted in the 60’s with vocal contributions from Serge Gainsbourg and France Gall – pretty cool. Their 12 new lo-fi, psychedelic pop songs are varied, sad and joyful at the same time, captivating but also a bit alienating (in short: very suitable for strange times), with vocals that complement each other like those of Nancy Sinatra and Lee Hazlewood. You’ll hear a tribute to Mark “Luke Skywalker” Hamill, but just as easily lyrics are about Kafka or Incas. And even if these names sound too heavy, the titillating music is light-hearted enough to please you. Enjoy!

Nos Jours Étranges is out digitally and on CD through Lunadélia Records.