We’ve already posted reviews of G​.​T​.​R​.​R​.​C.‘s compilation and Kepi Ghoulie & Vic Ruggiero‘s cover-rich album this month, I had to disregard Squid‘s Cover Versions EP because it is exclusive to Rough Trade shops, and I found out that I had overlooked a new, pretty good cover album by Deep Purple (Turning To Crime) last month, but these are ten other releases worth your attention.

Kiss Me Deadly || Cover: Chuck Prophet featuring Make Out Quartet || Original: Lita Ford
The most successful cover songs are often genre-transcending, with the covering artist differing considerably from the covered artist. That’s definitely the case here, where Chuck Prophet transforms Lita Ford’s 80s hard rock hit into a folk ballad with harmony vocals, acoustic guitar, violin and bells (not only the music but also the lyrics are more well-behaved now). It’s the closing song of four-track EP The Land That Time Forgot Revisited, out digitally through Yep Roc Records – Prophet re-recorded three songs of his most recent album, and this cover, live with a string quartet, on a linoleum floor on a rainy Tuesday afternoon in an empty barroom in San Francisco’s Mission District.

You’ve already seen our lists with favorite albums – here‘s Niek’s list and there‘s mine – but also many shorter format releases were wantlist worthy. Below you can listen to an overview of the Top 50 singles and EPs that I thought were the best from 2021. I’ve excluded releases with songs that also appear on my album list. Links point to Discogs or Bandcamp (the headings), and to previously posted reviews (in the body text) – add to your wantlist (or collection) what you like!

1. Noah C Lekas || Sounds From The Shadow Factory
[Beat Poetry, US || Blind Owl] To be honest I haven’t been able to give this one as much attention as I would have liked. Not only because I mainly spent my time on full-length albums, but also for practical reasons: only two songs are shared on Bandcamp, YouTube, Soundcloud and Spotify, and unfortunately a physical copy wasn’t available in Europe (and sold out quickly in the US). Still, I didn’t doubt for a moment whether this should be at the top, simply because this was the most impressive release of the past year in all respects. Poems and rock music form a great combination here: “It’s jazz for the mind // It’s blues for the soul.” It’s Art! 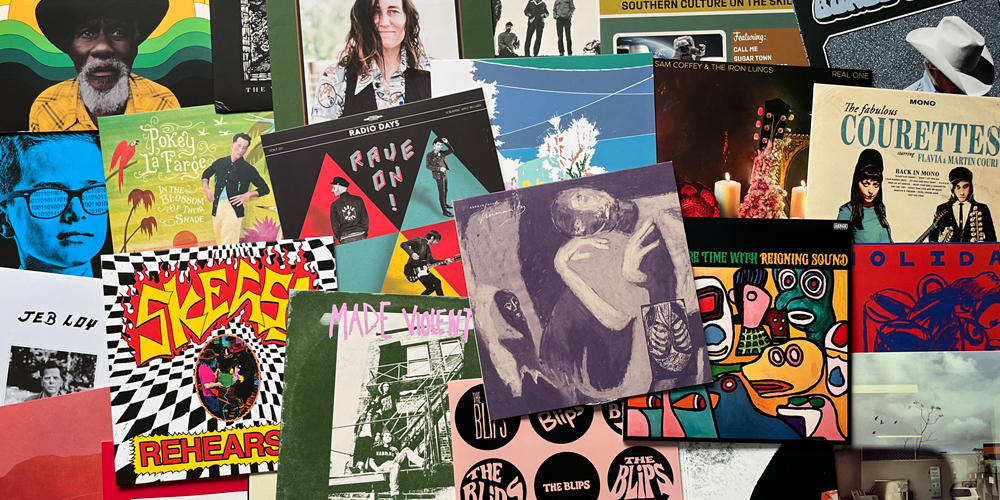 All year long we look forward to this moment of looking back, escaping the continuous flow of new releases for a while, taking the time to recap what really stood out these 12 months. In 2021 I took my FOMO more seriously than ever: I’ve checked out 2,200+ new albums, twice as many as last year (this hobby is getting out of hand). The disadvantage of this is that you don’t get any sleep, but still it isn’t possible to give anything that looks promising the attention it deserves. Anyway, along the way I built up a longlist of 120+ LPs that are wantlist-worthy, which I now have brought down to a Top 50.

In any post on this website, we try to put into words which artists are involved, how their instruments and vocals sound, whether their songs are catchy or dreamy or energetic or dark, where their inspiration for lyrics came from, etc., but I have my year-end list compiled as I always have, simply in order of what I loved and played the most – personal taste preference as the debatable deciding factor. My choices are all about guitar-driven, authentic indie rock, power pop, garage rock, roots, and jangle pop, plus a little bit of soul, country, folk, and alternative rock.

This is an interesting debut album, that deserves your attention for several reasons. The first thing you’ll notice is the inventive, vintage cover art by Rui Ricardo, where the band is served to you on a tray. The Austin, Texas-based band itself is certainly not made up of debutants, you could even call it a supergroup, featuring Walter Daniels (Jack O’Fire, Bigfoot Chester, James Williamson, Lydia Lunch, Alejandro Escovedo, Guadalupe Plata, Henri Herbert, Barry Adamson, among others) on vocals and harmonica, Evan Whitehead (Cunto!, Black Eyed Vermillion) on guitar, Kevin Curtin (Cunto!, Pleasure Tide, Boxcutters) on mandolin, Scott Stewart (Zero Skills, Inc, Pleasure Tide, Corrine Rose) on upright and electric bass, and Matt Hammer (Strange Boys, OBNIII’s, Wes Coleman) on drums. The skilled musicians mainly combine country, blues, and punk influences, but also gospel and yodel, in 12 lively, raucous songs that evoke the feeling of a live show. Bonus points for using a Nose Flute! As far as I’m concerned, this music is much more suitable for drinks than for a coffee break, but judge for yourself.

Have a Coffee Break With Walter Daniels & the Del Valle Trustees is out now digitally and on vinyl LP through Chaputa! Records and Ghost Highway Recordings.

Overdose || Cover: Supersuckers || Original: AC/DC
Friday December 3rd, Magnetic Eye Records will release the 2LP Best of AC/CD [Redux], featuring 13 cover versions of classics by the Australian hard rock band. The choice cut of the experienced musicians of Supersuckers was already shared last month – their cover of Let There Be Rock‘s Overdose is a heavy, excellent tribute, where you can hear for 6 minutes that they are true AC/DC fans.

Panic is out now digitally and on CD via Plan 9 Trash Records.

It took me a while to decode what’s in the cover photo, but my attention was captured. The band name of this five-piece hailing from South Minneapolis also raises questions: who is Betty and what does she refuse to do? That’s guesswork, but what we do know: the band consists of Margo (guitar, vocals), Eliot (lead guitar), Sheela (keys), Fletcher (bass), and Jackson (drums), and they play tender twangy rock ‘n’ roll with influences from country, blues and soul. If Tami Neilson had played in a garage rock band back in the day, I guess it would have sounded something like this. Their own description is more telling though: Betty Won’t sings with a tear in her eye and a skip in her step. Their debut album Lucky, just released, consists of five new original songs and four re-recorded tracks that were previously on a demo with the Guarantees. Lo-fi, honest, raw and authentic, captivating in every way. One question remains: would the stuffed animal on the cover be the Demon Dog they’re singing about?

Lucky is out now digitally and soon also available on cassette. Add to wantlist: Bandcamp

February 10, 2021: The Lethargics released their debut album Maladies & Melodies, which features 13 pretty good songs. March 20, 2021: The Lethargics released their sophomore album Hue & Cry, which features 12 pretty good songs. September 15, 2021: The Lethargics released their third album Rough South Short Stories, which features 13 pretty good songs. (Between March and September there were some non-album singles, also pretty good.) How do they do that? I asked the band’s songwriter Darrel Mendenhall: “We feel like we’ve got a story to tell. We try to shine light on tales and characters that haven’t been pushed to the margins so much as they have been shoved right off the page. We are Hillbillies, and we have all the rage and shame that comes with that. Our message is that we may be Waste People – but we are still people!”

It’s obvious: The Lethargics are not just any American rock band. They hail from the hard beauty of the hills and hollers of the Appalachian Mountains, near Knoxville, Tennessee, steeped in the histories and mysteries of rock, blues, punk, country, folk, and Americana. You can tell by their sparkling guitar-driven music, which is authentic, unflinching, passionate and brooding, with brutally honest songwriting. They call Rough South Short Stories – a telling title – the record they were born to make. It’s folky blues (or bluesy folk), with intensely sung lyrics about real life, love and loss, emotional lyrics that evoke rich images. In my opinion, it’s a record that is meant to be heard in the rest of the world.

Before you know it, there will be new work after the aforementioned trilogy, which I’ve been enjoying a lot lately: “Three albums in a year – I guess that’s mostly a product of not knowing how to do anything else and not having anywhere else to go. Heck, we may get another one out before the end of the year!”

Nashville singer-songwriters Aubrie Sellers and Jade Jackson were both artists in their own right, but social media contact during the pandemic led to a 1+1=3 collaboration. Their debut album Breaking Point, out now on ANTI- Records, contains ten folky rock songs, both dreamy Americana ballads and twangy riff driven tunes to dance to. Jackson (acoustic guitar) and Sellers (mellotron, bebot) share sultry vocal duties – their voices match very well – and their alliance sounds and looks like they’ve been friends for a lifetime, even though they’ve only known each other for a year. Both musicians contributed songs they had previously written, and there is one song they wrote together: Wound Up. In addition, there are two awesome covers that they completely have made their own: a flaming version of Julie Miller’s The Devil Is An Angel and an exciting reinterpretation of Suzi Quatro’s The Wild One. Jackson+Sellers, as their joint project is called, are reinforced by Ethan Ballinger (guitars, synth, keys), Matty Alger (drums, percussion, synth, bells), and Rich Brinsfield (bass). Watch and wonder: “You look at me so tender // But I wonder if there lies // Something dark and sinister behind those innocent eyes.”

No Comfort is the new (third) full-length album by American bluesy stoner duo Adapter Adapter. The first thing you’ll notice is the cool cover art by Jonathan Grimm; it was a no-brainer to add The Cosmic Mariner to our Favorite Album Covers Gallery. The second thing to mention is that songwriter Nick Ryder (vocals, guitar, blues harp) and Christopher Roy (drums, percussion) do not sound like those other duos from the blues rock genre (you know who i’m referring to), but at the same time evoke positive associations with rock bands with a larger line-up. These are eight energetic songs with heavy guitar riffs, powerful vocals, creative drum patterns and a cheerful harmonica, songs for stamping feet and nodding heads. A big sound on which you can challenge your amplifier.

No Comfort is out digitally and on vinyl LP.