The bad news is that this split cd between two of the finest garage rock-‘n’-roll acts of today contains no new songs. The good news is that all songs are hits. The CD compiles two Pale Lips 7″s and two singles by The Sorels. To be specific, it features Pale Lips’ 2015 debut Got A Sweet Tooth, and their 2017 single Should’ve Known Better. From the Sorels, it features their self-titled debut single (2019) and their 2021 Spring Break single – I wrote about that one here. It’s rather nice to revisit these songs. Candy Song was the tune that ignited my interest in the Pale Lips, and Don’t Take You Switchblade To New York remains one of my favorite songs of the band. She’s In The Gang by the Sorels is a killer track as well, and Spring Break provides as much joy as ever. Can’t wait for new music by both bands!

Crime Line are a band of five hardened veterans of the Norfolk (Virginia) music scene. who played in bands like Norfolk Nightmares, Great Dismal Swamis, Constrictor, and the Lousy Savages – all bands worth checking out. As Crime Line they released their debut EP Locked And Loaded earlier this year. The follow up EP is already here. It’s called Crime Line II: Violent Urges and offers an exciting blend of garagepunk and sleazy rock-‘n’- roll. The amount of swagger, energy, and melody in their music, which kinda sounds like a hybrid of The Hives and The Bronx, makes Crime Line stand out from the pack.

The new Metalleg record has 8 songs. It’s increasingly common for band to release 7, 8 and 9 track records and I’m never sure what to call this grey area between EP and LP. A mini LP? A maxi EP? Anyhow, it’s appears to be the right format for Totally Distant, a record that leaves you both satisfied and hungry for more. Metalleg operate on that continuum between powerpop, garage and rock-‘n’-roll where I feel right at home, or gutterpop as the band self-describes their sound. If you wonder why this band sounds familiar, and kinda like Dirty Fences, it’s because this band shares members with…Dirty Fences. That band already released two great singles this year, and this Metalleg record is another strong outing. Clearly, the pandemic hasn’t hurt their creativity. Songs like Radioactive, Seconday Love, and Back Around are instant hits, and with Hardest Part the band shows they need not turn their amps up to record great tunes. Good Stuff!

Rick The Loser is a low key side-project of Novia Scotia based singer/songwriter Eric Stephen Martin. Under his real name, Martin appears to adopt a more traditional singer/songwriter indiefolk sound. He will release his new record in a couple of weeks on his own (smartly titled) label Three First Names Records, and the first two teaser tracks are quite beautiful, particularly When I Get Back To My Feet.

But let’s talk about Martin’s other project, the one he doesn’t want us to talk about. As Rick The Loser, at least on the Combat Boots EP, Martin chugs out four classic timeless pop songs disguised as slack indie rock and garage pop. When I first heard Strange Dreams, I was blown away by how good of a song it is. It probably is my favorite recent discovery. Just My Luck is another instant favorite, but the other two tracks on the EP are far from fillers. The Bandcamp page of Rick The Loser features more recordings from the pandemic months, most of which is more mellow and more experimental than the songs on the Combat Boots EP. There is also a cover EP with a great deconstruction of Last Caress by the Misfits. To be honest, I wouldn’t mind a physical release of Rick The Loser’s lockdown recordings at all. 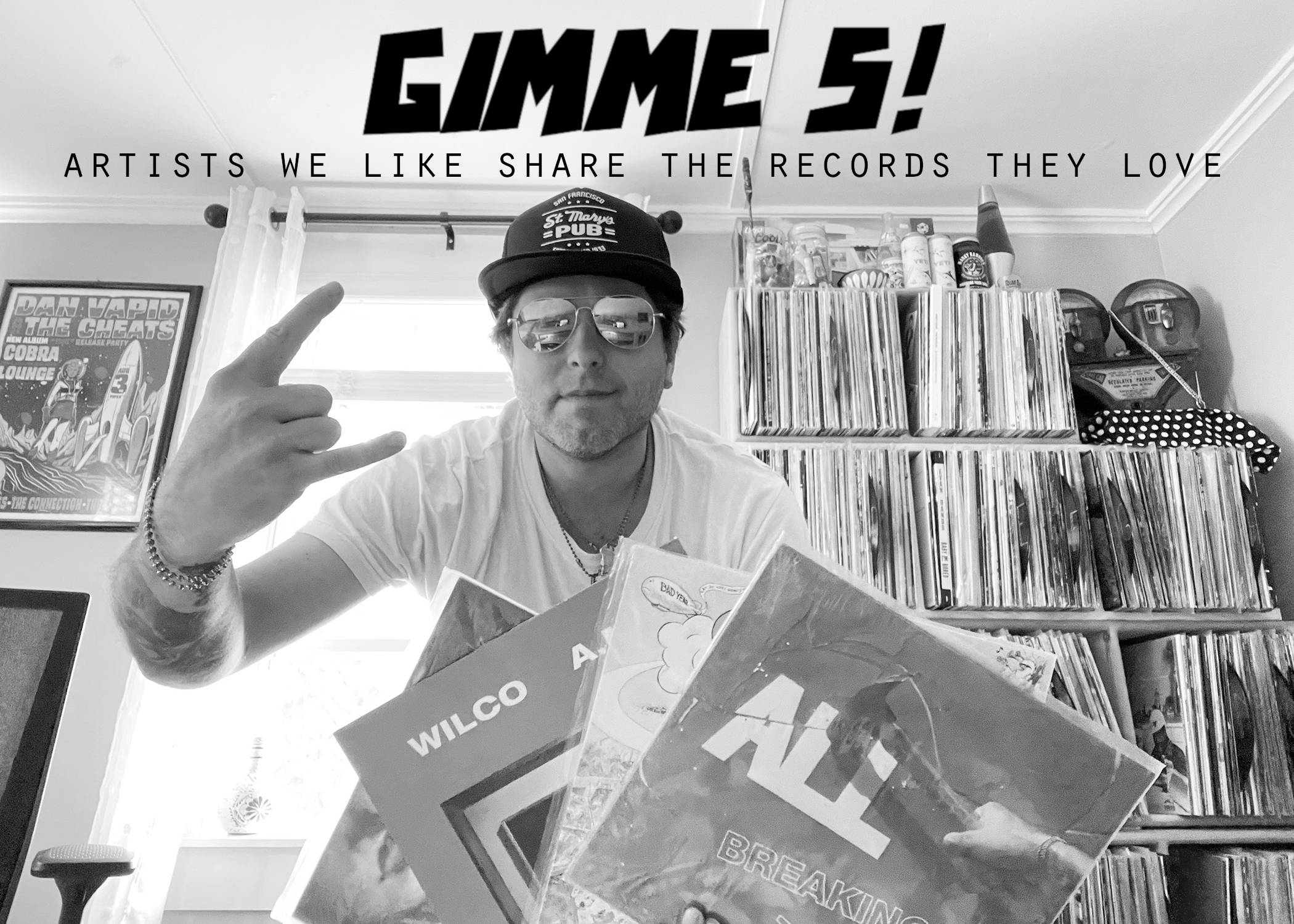 If I had a paper calendar, there would be a big red circle on Friday July 23rd. That date marks the release of the highly anticipated new Geoff Palmer record Charts And Graphs. I’ll write a review on it later this week, but I can already say that if you are a fan of Geoff Palmer’s previous solo album Pulling Out All The Stops, but also his work in The Connection, New Trocaderos, and Kurt Baker Band, you are guaranteed to like the new record as well. And yet, Charts And Graphs sees Geoff expanding his sound in different directions. Geoff recently discussed this with the excellent powerpop blog Sweet Sweet Music: “I love change. One thing that has always been a judge of success for me with a record or a band is doing something new, playing new places, trying new ideas for writing styles, new production ideas, anything we haven’t done before.” [post continues below]

New York City cool is back. Please meet the Women of the Night, three guys with the right looks, hairstyles and sunglasses. Singer / songwriter / guitarist Jordan D’Arsie, drummer Kyubae Lee and bassist / slide guitarist Gray Watson play a headstrong mix of proto-punk, new wave, psych, glam and garage rock. The interesting thing is that you’ll hear all kinds of well-known influences on their debut album Sub Rosa, but it isn’t possible to name them exactly; it resembles bands like New York Dolls, The Strokes, Television, Velvet Underground and Modern Lovers, but it’s different and elusive. These are three guys with their own sound, riffs and vocals. This is cool, this is good, this could get big. Listen to songs like The Stranger and Dark Horsey and it won’t take much effort to imagine that these are going to be hits. Sub Rosa is out now digitally and on vinyl LP through Declared Goods (USA) and Heavy Soul Records (UK).

We seldom post teaser tracks to new albums. The reason why I am breaking this rule is my infatuation with this surfrock-‘n’-roll song by Televisionaries. Televisionaries features three Lake brothers (Austin, Brendan and Tevor) and Aaron Milka. Trevor and Aaron also play in The Shine and Danny’s favorites, two additional projects we featured. Full album expected this fall on Hi-Tide Recordings.

Greg Antista And The Lonely Streets exceed expectations. The band consists of four veterans of the Southern Californian punk scene: Greg Antista (lead guitar, vocals), Frank Agnew (lead guitar, vocals), Warren Renfrow (bass, vocals), and Jorge E. Disguster (drums). The list of bands they played in is long and includes Joyride, Foxy, Adolescents, TSOL, Manic Hispanic and Mink Daggers. Who would’ve expected back in the eighties that these punk kids would still be making music in 2021? And, more importantly, who would have expected that music to actually sound really good?

Under The Neon Heat is the band’s second album and finds the band in perfect shape. Is it punk? Definitely not. Powerpop is probably the most apt descripion. These essentially are three minute guitar-driven and hook-filled pop songs. But the band’s sound has also been described as rock-‘n’-roll with a touch of americana and I get that as well. Fair to say, if you like the music Rum Bar Records usually puts out (e.g., Brad Marino), you will like this as well. The vocals of Antista and his vocal melodies is reminiscent of Mighty Mighty Bosstones, but without the ska and the horns. There is a familiarity to this songs which makes this record easy to get into, but there is freshness to it as well showing that the punk spirit in these four veterans is still burning bright. Like I said, the band exceeds expectations, including mine. I did not expect to enjoy this record as much as I would. Under The Neon Heat is out now on pink vinyl on Primal Beat / Smelvis Records.

It’s usually a good sign when you have to check if a new release is not some kind of reissue of a sixties or seventies garagepunk record. But no, Ultrabann is a new band born out of befriended musicians from different bands (Ghetto Blasters, Future Virgins, Vacation, Barrence Whitfield & the Savages, Cincinnati Suds) messing with their instruments from home during a pandemic. The result is a guitar worshipping, sleazy punkrock-‘n’-roll record, with the swagger of The Stooges and the thrill of a high-octane rollercoaster. Try sitting still to Tight But Loose. Try to keep your head from nodding to the beat and guitar riff of I’m Sick. I know I can’t. And those are only two of the many highlights on the record.

I didn’t see this one coming, and it’s hitting me hard. Out now on Let’s Pretend and Mondo Trasho Records and limited to only 200 LPs.

Must own single alert! There is only one way to play the Patterns EP of Tee-Vee Repairmann and that is with the volume turned all the way up. Take the guitar riffs of Sheer Mag, throw in some snotty Aussie vocals, back it up with drum beats from either a human or a machine and you get the incredible contagious powerpop-meets-garage meets-punk mashup that is Tee-vee Repairmann.

Teevee-Repairmann is the latest project of Sydney native Ishka Edmeades, a human centipede who plays in a multitude of bands (Research Reactor Corporation, Set-Top Box, Satanic Togas, G.T.R.R.C, Gee Tee), has a record label (Wartmann Inc), a zine (TV Guide), and is a graffiti artist. Want to find out more about this artist? Go here.