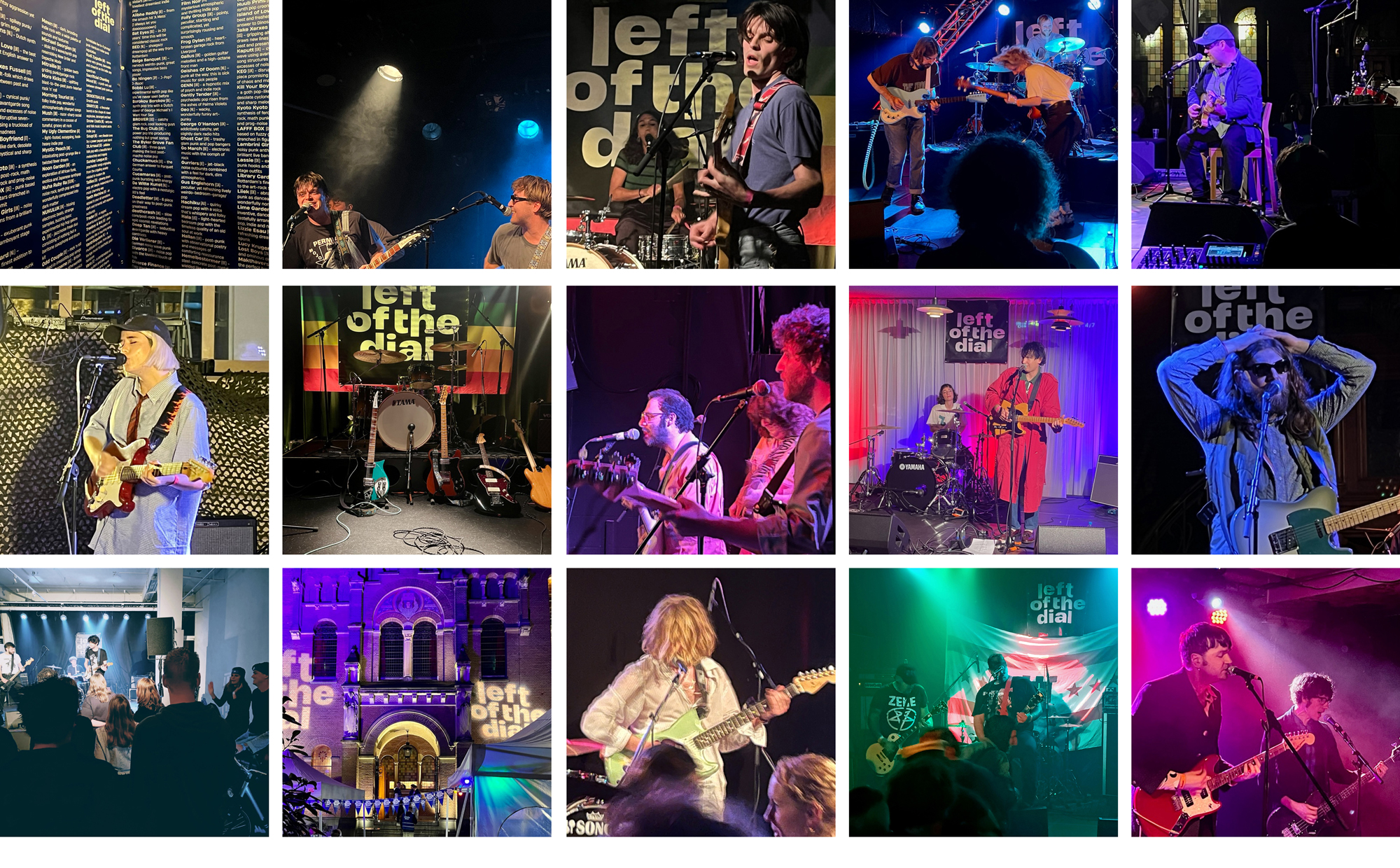 Left of the Dial is an annual international showcase festival that takes place in mid-October in the city center of Rotterdam. The tastemaker event, named after that song by The Replacements, offers three days of new alternative music: more than 100 bands (many of them perform twice or even thrice) on 12 different stages (including a sailing boat, a stationary lightship, a beautiful church, and an improvised gym where you have to cycle to put the performers in the spotlight) – it must have been a complex logistical challenge. Because we love Rotterdam, but even more because the program fits very well with the releases we’ve written about before, the Add To Wantlist crew was happy to be there. We enjoyed a lot of great bands in really cool locations (in most cases with surprisingly good sound quality), along with other music fans (and members of performing bands in the audience) who weren’t there just to catch up, but to enjoy all those amazing shows. If one thing became clear: rock ‘n’ roll isn’t dead, far from it.

Unfortunately it wasn’t possible to experience everything (we’ve taken quite a few steps though), but for us these were the highlights of what we did see (in order of appearance):

Holiday Ghosts (UK)
Bluntly oversimplified on the festival poster as “Writers of garage pop super hit Off Grid” || The pureness, sense of joy and contagious energy that we know from their studio albums come into their own even better live, the dual vocals make the strong songs even more powerful. Broken strings couldn’t spoil the fun. The band announced a new album for next year, which promises to be great based on the first tastes.

Eades (UK)
“Indie rock floor fillers” || Eades are a band with five energetic eye-catchers who are pretty convincing in both their performance and their songs. They more than lived up to the high expectations, very cool to see/hear the tracks we knew from their debut LP Delusion Spree and previous work come to life. What I realized here in Rotown (and was confirmed more than once during the festival): polyphonic vocals always have added value. (By the way, a correction to my earlier reviews: the percussion that I previously attributed to the drummer, comes from the keyboardist.)

Gus Englehorn (CA)
“Peculiar, yet refreshing lively weirdo-bedroom-garage/pop” || To be honest, I was a little nervous going to the Alaskan singer-songwriter’s show, given the disturbing listening experience of his recent album Dungeon Master. Although the lyrics are quite weighty, Gus Englehorn’s performance (vocals, guitar) with Estée Preda on drums was heartwarming and amiable. Heavy Daniel Johnston vibes. More stripped-down than on record, but that worked out well. A theatrical and intimate recital that touched.

Mitraille (BE)
“Golden teeth griding punk/garage rock” || Belgium trio Mitraille faced two challenges at the start of their show in “The Gym” in local art laboratory Roodkapje. One: it was the first show of their new drummer. Two: the band had to rely on the audience to provide the energy by riding electric bikes during the show. All parties involved delivered. With frenetic energy, Mitraille made good on the promise of their excellent debut LP.

Tallies (CA)
“Glowing dream pop, yet deeply melancholy in the most charming way” || One of the great things about a festival like this is that you can unexpectedly come across nice discoveries. We walked into the 125-year-old national monument Arminius to take a look at the LPs, CDs and t-shirts (the “Merch Church”), where Tallies were performing at that time. We were blown away by their pure music and especially by the angelic vocals of singer Sarah Cogan, which fit well in this beautiful location.

Holm (DK)
“Stylish indie rock chockful of pop hooks” || Just like their debut album Why Don’t You Dance takes several listens before you embrace it, that’s also how it works with Holm live. At the first song you think it’s nice, after ten minutes you think it’s pretty good, towards the end you think it’s great. Charismatic frontman Mikkel Holm Silkjær won’t settle for less, but will win you over anyway.

Frog Dylan (UK)
“Heartbroken garage rock from Liverpool” || The British slacker rock outfit doesn’t seem to have an online presence, but IRL they are coming to the fore. The five-piece play infectious guitar driven songs with pleasantly raspy vocals and with nice movie samples in between. When they leave the stage one by one, you wish they had played a little longer.

Never mind, on to the next show!

Rifle (UK)
“A band with a formidable live lo-fi grungy/post-hardcore noise punk reputation” || The small stage in Perron is dark and stuffy, with a low ceiling. It proved to be the perfect spot for Rifle. Wearing dark glasses and trainers, the UK band played throwback UK ’82 punk with a charismatic singer who transforms into a screaming maniac on stage. Rifle’s short set injected a rush of adrenaline in the veins of the audience.

St.Arnaud (CA)
“Palliative folk pop with a beautiful hint of melancholy and tragedy” || Singer-songwriter St.Arnaud and his likeable friends closed out the tour promoting their new album Love And The Front Lawn on Left of the Dial, and they did it very well, with bright poppy folk tunes in which the trumpet made the sun shine. The closing song, which they said they had just written, started out as AC/DC’s Thunderstruck and it left us wanting more.

Yawners (ES)
“Suena Mejoooooooooor” || That feeling that you weren’t fully appreciating the power of a record yet until you’ve seen the band live? That certainly applies to Yawners, who played a lot of songs from their 2022 record Duplo. The trio deserved a bigger audience with their mesmerizing noise pop songs, but we really enjoyed seeing singer Elena Nieto in action in reality, focused and driven.

Jake Xerxes Fussell (US)
“Gripping alt-folk which draws new lines between past and present” || The Arminius church arguably was the most gorgeous location at Left Of The Dial. Jake Xerxes Fussell proved to be the right man at the right time at this location. Fussell plays stripped down alt-folk and for the majority of his show the only thing you’d hear is his voice and his awe inspiring guitar play. No talking audience to disturb the vibe, and judged on the faces in the audience, we’re pretty sure a lot of atheists were converted to Fussell’s gospel right there.

The Bug Club (UK)
“Power pop trio producing nothing but great songs” || Obviously we were already fans of The Bug Club, and the two shows we attended here only reinforced that – we now also saw how skilled musicians they really are. Their short and catchy hits – many “newies” of Green Dream in F# – were fired at the receptive audience at a rapid pace, cheeky but likeable. Bassist Tilly (in a Holiday Ghosts shirt) leaps across the stage as if AC/DC’s Angus Young has taken possession of her, regularly going head-to-head with guitarist Sam – their vocals complement each other wonderfully (we like their woo-hoo harmonies). Drummer Dan looks at it with shining eyes, and the more fun he has, the harder he beats his barrels. In the meantime we got a lesson on how the word “art” should be pronounced. Great to see, great to hear.

Ethan P. Flynn (UK)
“The post-millennial synth driven Jonathan Richman” || It was somewhat confusing, as what had been billed as “indie synth pop from a British songwriter and beatmaker”, turned out to be an orchestral set one would expect from an American folk outlaw. Anyway, this approach fit very well here on the stage in front of the enormous church organ. The frontman, with an old guitar and dark sunglasses, easily silenced the room with his heavy lyrics and powerful vocals, the cellist sitting next to him regularly managed to attract attention.

Skroetbalg (NL)
“Patriotic Drenth punk” || A Dutch reincarnation of Motörhead. Extremely loud and fast and with in your face lyrics that are stripped from any level of subtlety. Loved the between song banter (“Here’s a song about something a lot more people should do, it’s called Hol Oen Bek (translated: Shut Your Mouth)”), loved the level of conviction. Skroetbalg sure won over some hearts in Rotterdam.

Brower (US)
“Catchy glam rock, cool looking guys” || While we were finishing our dinner in the restaurant next to the concert venue, Brower’s motley crew started their performance there. The loud stomping came right through the wall, and we immediately knew we had to be there. And what a cheerful, colorful dance party it was, with a sound fatter than the burgers we had just eaten.

More Kicks (UK)
“Uplifting blast-to-the-past pure-hearted rock ‘n’ roll” || For a band on a tight travelling schedule and with recent car troubles, More Kicks sure showed up to wash away any cynicism about the state of rock’n’roll. The band felt “right at home on a festival named after a Replacements song,” and expertly showcased the best songs in their discography. We already loved this band, but were blown away by their live show (side note: what a joy to watch Kris Hood on drums (also of Los Pepes and The Speedways), beating an unbelievably fast and loud rhythm, with sweat and a smile on his face – spare sticks in the back pocket). Super tight, super fun, and boy do they look cool rockin’ out on the 1951 red lightship V11.

Meltheads (BE)
“White-hot, dastardly punk rock anthems from Antwerp” || We had already encountered the Belgian noisemakers earlier this year at the Sniester Festival in The Hague, but here in V2 Lab for the Unstable Media they surprised even more. Yunas, Tim and Simon play catchy garage rock with funky tones, as well as raucous punk and heavy alternative rock (don’t they want too much?), while frontman Sietse screams his lungs out and can’t resist joining the moshpit. Sweet Monica is the hit, but new single Na​ï​ef makes the most impression.

The People’s Pleasure Grounds (NL)
“The catchiest surf/garage/psychedelica imaginable” || TPPG pretty much closed out the Left Of The Dial fest, and judged by the response,  the yeehaw surfy garagepop of the band was just what the doctor ordered. A lot of people moving around and happy faces all around. TPPG have the looks and sound of a band ready to break out in 2023.

Left of the Dial 2022 – the fifth edition of the festival – was very successful in every way. See you again next year!

PS   Some of these reviews were written by Niek – regular visitors can probably guess which ones. 😉 You can also find some of the photos above on our Instagram account. And finally, below you can watch a 30+-minute recap filmed during the festival.