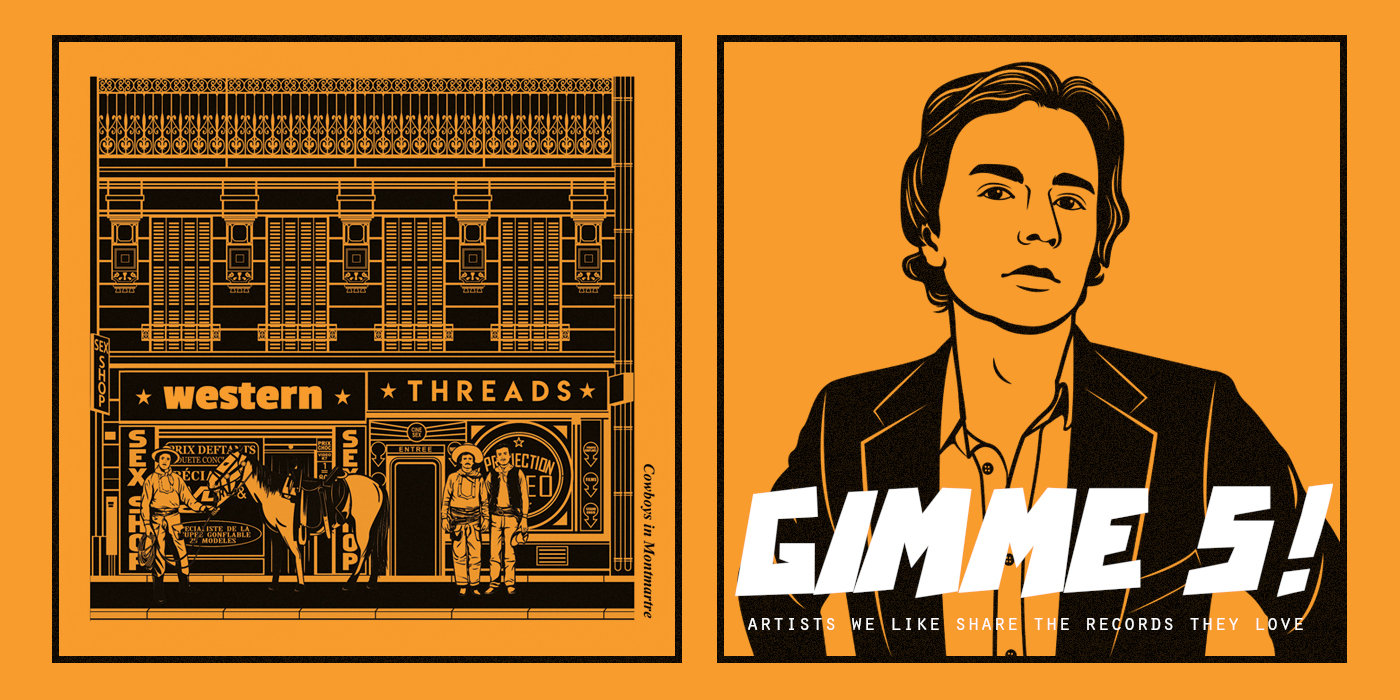 Collecting records is not only about the sound, but also about the visual aspect. So browsing through the endless stream of new music on Bandcamp I’m more likely to give it a listen if the cover art is cool. Usually the expectations that an image creates are not fulfilled, but sometimes you are pleasantly surprised. That’s how I discovered Cowboys in Montmartre, the debut album by indie pop band Western Threads that will be released at the end of this month. Great music, great design.

I am very honored that Jacob Lewis, who together with Christopher McBee, Ainsley Richter, and Michael Sherer make up Western Threads, and is also responsible for the cover design, is willing to share with us some of the albums that inspired Cowboys in Montmartre. Click below to read and listen. Jacob added short explanations for each pick. We added YouTube videos and Discogs links so you can add these records to your wantlist. Thank you very much Jacob!

‘Western Threads. Sounds like a country band doesn’t it? We are. Except when we’re not. Which is often. Here are five records that inspired Cowboys in Montmartre, our debut LP.

“I’m eternally grateful to my past influences, but they will not free me…”

I didn’t discover Gainsbourg until I was nearly 30 and thinking that being in a band was perhaps a hobby that should be retired. Ageism is a major prejudice in indie-rock and I was beginning to feel disconnected from the local (Austin, Texas) scene. When I picked up J’Taime and Histoire de Melody Nelson it was like a shot in the arm that’s kept me young ever since.

“The sun shines in my bedroom when you play…”

When I was eighteen I found myself squatting in an empty house with some friends over the Christmas holiday. We’d go to work during the day and return at night, eat junk food, listen to music, and watch movies. It was a very romantic time and every day seemed tinted with joy and excitement. The music of The Vaselines is like that. It’s naïve, noisy, irreverent, and lovely beyond words.

“I may not look right but I sure do feel fine…”

After we finished recording Cowboys in Montmartre I shopped it to every record label I could think of in the vain hopes of finding a partner to help produce a vinyl edition. The indie labels said we sounded “too country” and the country labels said we sounded “too indie.” I wonder if Lee Hazlewood ever experienced something similar? This is an album I’d recommend to fans of off-beat pop who normally wouldn’t be attracted to country music.

I had an English teacher once, Ms. Rob, who judged male authors by how well they rendered their female characters. I always think of that when I’m writing material for Ainsley (Western Threads co-vocalist) to sing. Bikini Kill’s New Radio is one of the top 10 7″s of all time.

Cowboys in Montmartre will be released 2/27/21 and is available for pre-order NOW via westernthreads.bandcamp.com!’

A review of the album will follow when it becomes available.