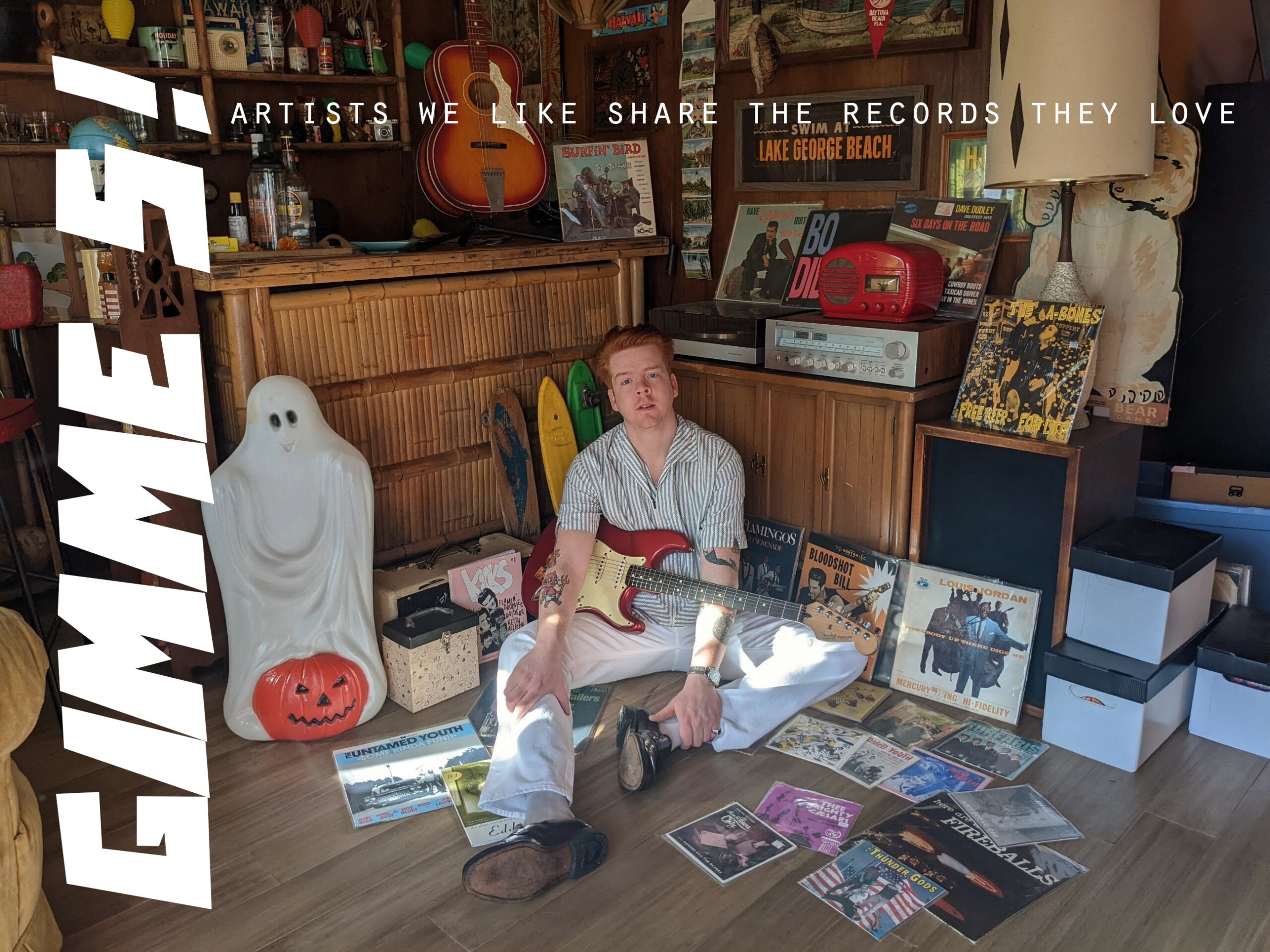 Trevor Lake has been poppin’ up in different capacities since we started this website. We covered his work with Sweet Pete, The Shine, Danny’s Favorites and Televisionaries. So yeah, to say we are fans of the music of Trevor Lake is an understatement. Two things stand out with Lake.  One: whatever style he plays, whether it’s punk, surf or rock-‘n’-roll, it sounds very authentic, pure and true to its origins – making him the perfect candidate for a Gimme 5. Two: he makes it look all so easy and effortless. [post continues below]

We are particularly looking forward to his debut LP with Televisionaries. In that band, he is joined by his two brothers Austin and Brendan and best friend Aaron Mika. The Lake brothers grew up writing songs and playing music together from a young age. Punk music and skateboarding was the main inspiration early on, but eventually the boys fell in love with surf music and other early rock-‘n’-roll styles. And you can tell from the music and aesthetics of the band.

Televisionaries’ killer 2021 single Charlotte Beach shows that the band has perfected that surfrock-‘n’-roll sound by now. Hints of greatness were revealed earlier though, for example in the pop-perfect Over & Out and the throwback r’n’r of Ram-A-Lam-A. The band also released an EP with Bloodshot Bill. Time for the next step: a full-length called Mad About You, which will be out April 1 on LP through Nutone Records (a division of Hi-Tide Recordings). Based on the first single – the title track, it’s going to be great. Watch the video below.

To mark the release, we asked Trevor Lake to do a Gimme 5 with us. He decided to pick 5 records, in no particular order, that he thinks are just plain great. Enjoy reading and listening.

1. Dead Kennedys – Plastic Surgery Disasters
“Dead Kennedys were obviously one of the major players when it comes to American punk and hardcore. But you also kind of get the feeling that they were critics of the whole movement. In my eyes, that made them the MOST punk band out of all of them. Easy Bay Ray’s surf style guitar over the lightening speed of D.H Peligro’s drums just spoke to me as a young musician and still does to this day.”

“Yeah, yeah everyone’s heard about the bird. The title track has 33 milllion streams on Spotify thanks to the masses hearing this song on Television sitcoms and commercials. Surfin’ Bird is a genre defining song when it comes to the surf, garage and frat rock sound. But man, this record is full of incredible songs! These guys were born to play together as The Trashmen. This record is the ‘how to’ on sounding like a 1960’s rock n roll group. Roll over McCartney.”

“Bloodshot Bill is a 1 man Rockabilly band who in the likes of Hasil Adkins, records himself while playing all of the instruments. The benefit to doing everything yourself is every record is 100% THAT artist. Bloodshot is damn good! For the past 3 years Televisionaries have backed him on stage on occasion and even recorded a 4 song EP with him.”

4. Louis Jordan – Somebody Up There Digs Me

“Now I know we have all been force fed the notion that Elvis P. is the king of rock n roll and may have invented rock n roll but that’s just a farce if you ask me. No offense to Elvis in any way. The throne belongs to this man, Louis Jordan! He was making rock n roll music starting in the late 1930’s that checks all the boxes on the ‘what is rock n roll music’ checklist. This album in particular is Jordan’s proof that he can compete with the Bill Haley’s of the late 1950’s and still get away with swinging to his hearts desire. I could go on and on. Just listen to it loudly.”

“The Flamingos were a Chicago Doo Wop group known most famously for their song I Only Have Eyes For You. Don’t be fooled by Flamingo Serenade which is mostly a record of slower more ‘midnight songs’ (as we call them.) The Flamingos had plenty of upbeat, floor filler tracks that blends jump blues with a bunch of dudes singing harmonies. It doesn’t get any better. Anyways, I Only Have Eyes For You may be one of the most beautiful songs ever recorded. It’s a hit for a reason. If I could take a trip back in time to sit in on a recording session I think this would be the one. I’m sure this song has helped cross many a young lad over to the ‘not being a virgin anymore’ side.”