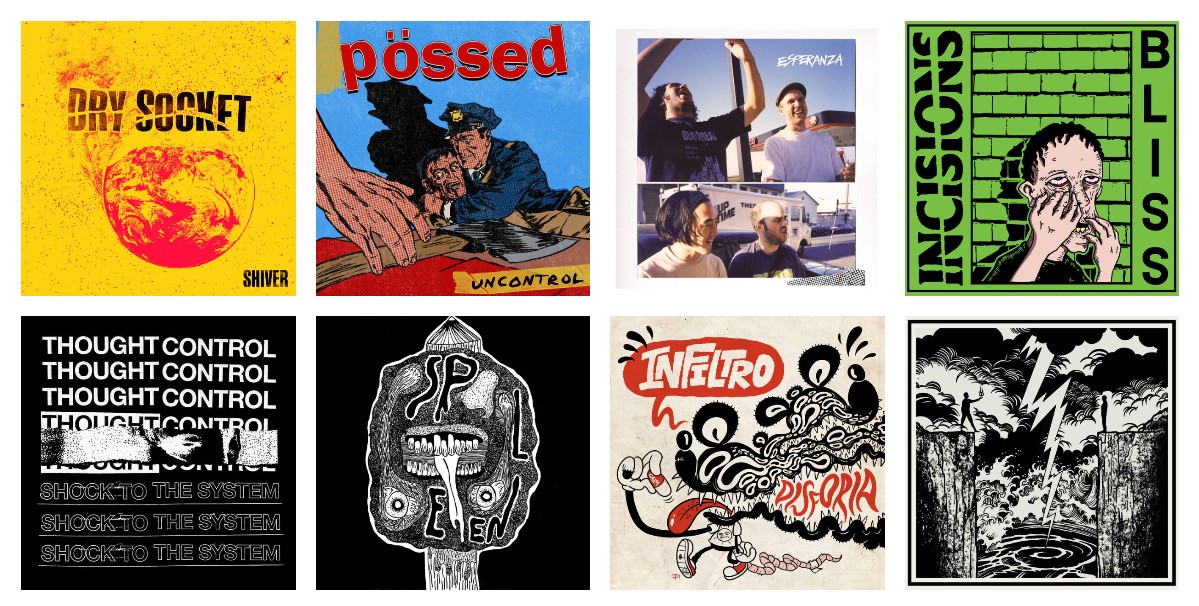 Though the majority of my posts are punk and garage leaning, I also listen to music that push the boundaries and expectations of this blog. I am talking about music that is a bit more extreme in terms of length, speed, and loudness. It’s the kind of music that may scare or disturb some, or met with plain disinterest by others, but I believe are still worth checking out. Each month I wrap-up those releases in one post: Shorter, Faster, Louder. [continues below]

Dry Socket ||  Shiver
Dry Socket are a political hardcore band from Portland.  Singer Danielle Allen sounds absolutely pissed with  the state of the world, and Shiver is a cathartic release of frustations about climate change and capitalism. Dry socket clearly is a skilled band, drawing their influence from acts like Kill Your Idols and Paint It Black. They do not copy that sound directly,  but found a way to balance agression with hardcore swagger and cool guitar work.

Esperanza  || 1998-2001
Esperanza was a shortlived hardcoreband from Southern California. I missed them at the time, but I am happy Extinction Burst has decided to release their discography on a LP, including a twenty page booklet. Esperanza clearly worshipped ’80s DC hardcore, but this very much is a late ’90s hardcoreband – American Nighmare came to mind when I first heard this LP. Given the band’s soci-political awareness, it’s no surprise that its members went on to do bigger things, becoming influential professors, scholars, builders. Oh, and their guitar player became a renowned DJ (Steve Aoiki).

Incisions || Bliss
This probably is one of the more accessible albums I’ve discussed in this feature. There are even some woohooo’s on this record. But throughout it all, Manchester hardcorepunks Incisions sound relentless while managing to keep their songs interesting and diverse. The guitar work stands out. This is modern hardcore done right!

Infiltro || Disforia
I know nothing about the state of hardcore in Ecuador, but Infiltro shows that there is at least one band that is worth checkin’ out. It’s not just the album art, which made our favorite covers gallery.  It’s their music as well. Infiltro mixes up extremely agressive and loud start stop hardcore with more melodic parts (listen to Toby for example), that almost lean towards alternative rock. Definitely a band to watch!

Locked In || The Solemn Leap
The album art – with emphasis on ART, drew me in. The music,  riff-heavy and an intense mix between hardcore and metal, made me stay. The Solemn Leap is the Italian band’s second EP after a 7-year hiatus. Epidemic Records is considering  a limited vinyl run for both EPs in the near future. Do it!

Pössed || Uncontrol
Hope you don’t mind me sharing some stuff that albeit new to me, was in fact released late last year. Pössed are a four piece from Bandung (Indonesia) who play fast and furious old school hardcore for fast and furious kids.

Spleen || Spleen
This band from Leipzig (Germany) play noisy hardcorepunk, My favorite track from this EP is Toxic, which has a level of hyperactivity it leaves me short of breath.