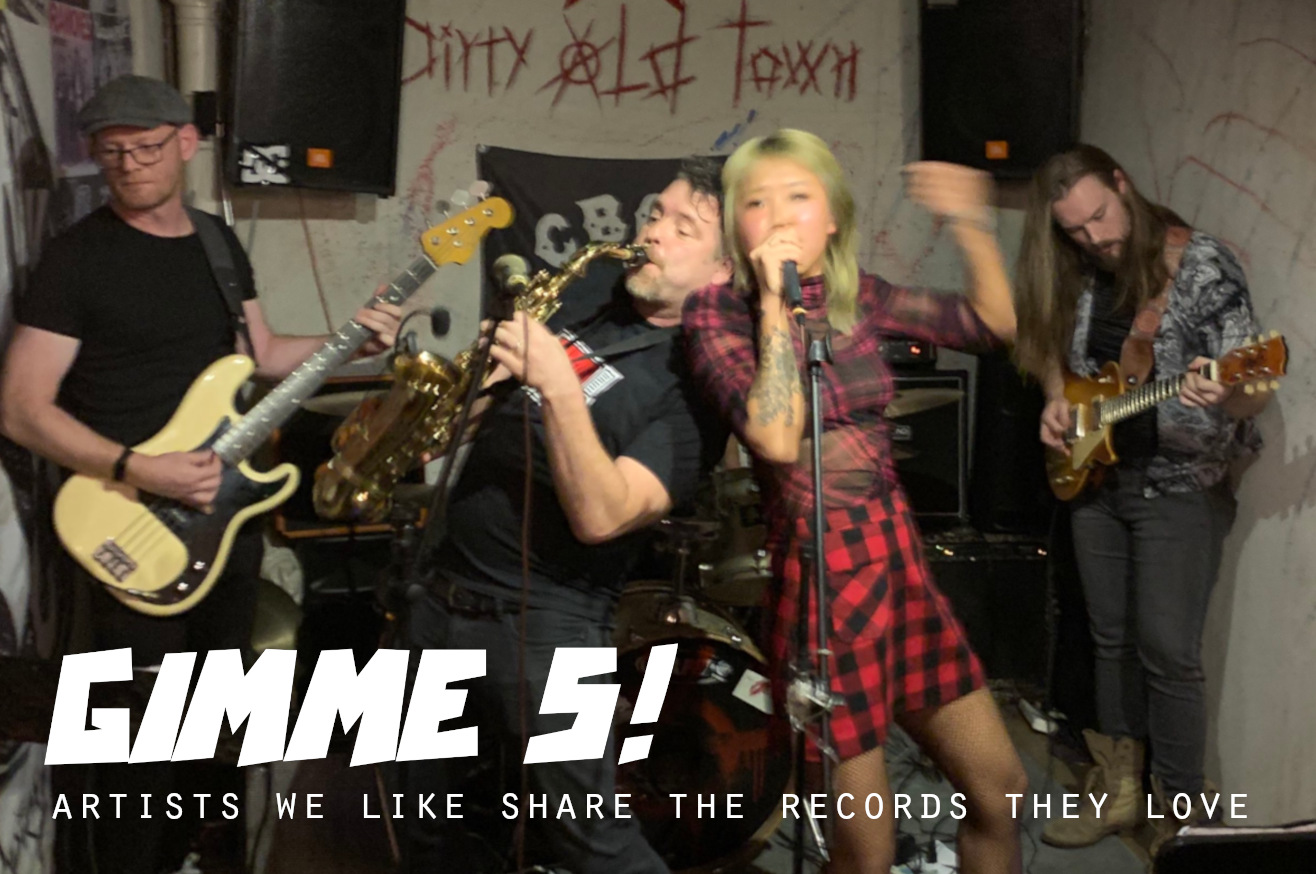 I am not really open to electronic dance music and some extreme niches, but otherwise I try to listen to many different music styles. However, when I came across Hogchoker, my head almost exploded: the band from Shanghai plays original, theatrical, punky world music with a message of social justice and inclusivity, spiced by anarchic humor and big brass jazz, funk, salsa, klezmer and ska riffs, with guest musicians like Argentinian opera singer Ernesto ‘Ruso’ Bauer en reggae legends Max Romeo and Big Youth. That intrigued me to the extent that I was very curious about their sources of inspiration. Simon Jackson, singer, songwriter and sax player of Hogchoker, is kind enough to explain this to us in detail. A lot to discover – very interesting, very cool!

Simon Jackson (Hogchoker):
‘Having spent over a year recording what I hope is the most eclectic and entertaining set of songs you’ll hear this year, playing with artists from Argentina, Brazil, China, France, Ireland, Jamaica, the UK and US, I’ve tried to put together a list of the songs that reflect the mix of genres, nationalities and influences on the album. I’m Simon, singer, songwriter and saxophonist for Hogchoker. The album is Roll Up for the Crazy Sound of Hogchoker, our 8th so far (with nearly as many line ups).

If Kultur Shock were a form of transport it would be a super pimped pink Cadillac bristling with paraphernalia – brass instruments, fireworks, dildoes, rakija and sljivovica bottles, haunches of smoked meat and a live goat protruding like porcupine quills from the tinted windows. They are the best advert for immigration ever, skewering the bloated American rock world with irreverent, wicked humour and crazy Balkan klezmer metal riffs. It’s the perfect mix of East Europe and US, dumb humour and sharp political commentary, world music and metal, satire and self-mockery (‘I know we are no longer cute, I know I will never hear this song on the radio’). Good Balkan brass ‘truba’ as heard in the Guca Festival in Serbia, is pure punk; anarchic, impossible not to leap up and down to, and when electric guitars are added it blows me away. I got madly into the ‘truba’ form of klezmer music through the Bregovic soundtracks to Emir Kustirica’s films, Fanfare Ciociarlia (many-time winner of the Guca Festival Band of Bands award) and then found the punk versions such as Kultur Shock. Although straight klezmer riffs only made it onto one cut, Shoot the Poets with its satirical, political grandstanding and Balkan choruses, in trying to make an album that’ll make your feet and mind leap around like crazy, this klezmer-truba-punk has been a big influence on our sound from the start. If you like it, check out Check Out Chekhov from our 2018 LP Living in the Future. (By the way, if you want to buy the Shoot the Poets single, all proceeds still go to PEN International, a brilliant organization fighting for the release of imprisoned writers around the world.)

We made the first recordings of Hands in the Air in Buenos Aires with the baritone opera singer, Ernesto ‘Russo’ Bauer, mixing up ska, salsa, punk and opera, so Argentinian band Los Fabulosos Cadillacs, who have built their sound around collaboration and mixing up genres, were a key influence. While Fabulosos Calavera (1997) introduced heavy metal and La Marcha del Golazo Solitario (1999) drew heavily on jazz, their key sound is South American tinged ska. They’ve collaborated with Fishbone, Debbie Harry and, on Mal Bicho, Mick Jones. It’s not their most out-there track, but it has a powerful message (“In school they taught us to memorise the dates of battles, but how little they taught us of love…I will not go to your wars, to your violence, to your injustice, to your greed, I say no!”) and an unstoppable locomotive rhythm. The brass is a clarion call to (or against) arms and hearing Mick’s heavily London accented Spanish coming in at about 2:15 (hear also The Clash’s Spanish Bombs though I believe it’s Joe Strummer’s pidgin Spanish on that song) always brings a huge smile to my face.

I think The Guardian got Arab Strap down pat when they described them as, ‘Coming on like a union between Sleaford Mods and Leonard Cohen consummated in a Glasgow pub toilet’. Obviously, this song wasn’t an influence on the album as it came out after ours, but their feral, foul mouthed honesty and habit of putting themselves in the mind of someone else (in this case a fox) has been. On the album I sing though the lips of a circus huckster drumming up trade, Snow White, the spokesperson for an oppressive, censorial regime, a teen raver after his first E (X for American readers), a getaway driver and on Night Vision Goggles as a young, American soldier realizing the locals he thought he was bringing freedom to and liberating see him as an invader, not their liberator. Fable of the Urban Fox is a wonderful political allegory against the small-minded racism, xenophobia and anti-immigrant Brexitism infecting my country at the moment, sung through the eyes of a fox bringing his family from the countryside into the city to find bulldogs telling them to “fuck off back to fox land, these streets are fucking full”, the press reporting “our streets are overrun with vermin…these scruffy, scrounging parasites, they are not welcome here” and an English shop keeper attempting to kill them with a cricket bat. “There’s no rest however far we roam, somewhere in this earth we will find home.” Our Horace Andy collaboration, Home on the forthcoming Fish Good EP deals with the same themes, especially for the Windrush generation.

Mr. Bungle || Travolta (released as Quote Unquote on the album)

In the six years we’ve existed we’ve gone through an almost Fall-like stream of members – 6 guitarists, 5 drummers, 3 bassists, a couple of co-lead vocalists and me on sax and vocals. Plus a legion of musos to add to our live shows. According to Tom, our bassist, I’m ‘part genius, part madman, part plonker’. He didn’t discuss what percentage of each or if it affected our turnover of guitarists. Anyway, whenever we’re trying out a new musician for the band I play him or her these two songs. If they hate them, Hogchoker’s probably not the right band for them. To be honest, I could play them anything off the first two Bungle LPs. We try to channel some of the true, crazy genius of Mike Patton, Trevor Dunn and Trey Spruance, or Midori’s Mariko Goto, into the music while maintaining a danceable, shout-along, ska-jazz-punk vibe. The schizophrenic, heart-pounding piano riffs halfway through Hey! Snow White! are a direct homage to/steal from Midori’s girl-power piano. The link is for the title track on Midori’s Swing EP, but Himitsu no Futari or the second track on the EP, Akan, are maybe more representative of the mixture of beauty and sheer aggression Midori can summon.

5.
My biggest influences are my bandmates and collaborators. You could say it’s cheating to count ‘collaborators’ as one choice, but my attempt to subvert the Five Track rule will be no surprise to anyone who knows me.

Parachutes on Fire, one of Shanghai’s all-time greatest bands, show how to utilise unusual structures and time signatures while still creating magical, infectious music. After they broke up we kidnapped Matt Saunders to bring his jazzy licks and perfect timing to our sound.

Max Romeo || The World is on Fire

Chase the Devil is possibly his best-known song, which he incorporated into our track Roll Up, and onto The Prodigy’s Out of Space, but this cut from 2020 is even more impassioned, political and relevant. Max left home aged 14 and worked on sugar plantations until he was 18, won a talent contest and moved to Kingston. He’s been recording ever since, often championing the poor and dispossessed. He’s a great bloke to work with – creative, funny and kind. The last year or two have been a good time for the elderly statesmen of Jamaican reggae with Max, Horace and Big Youth all bringing out great albums, and Toots and the Maytals releasing one of my favourite albums of 2020, Got to Be Tough.

This haunting track is far from his early MC work on Screaming Target – it’s more reflective and meditative. Maybe that’s what age, or wisdom, does to you. The Twilight Circus dub version of this song is also outstanding. Like Max, Big Youth also left his Trenchtown home in his teens. He worked as a taxi driver before spending a lifetime making amazing music. With a preacher mother and police officer father it was inescapable that he would sing about social justice. As well as his contributions to Roll Up to the Crazy Sound of Hogchoker he also sings on a swing-jazz-reggae number about the gaping chasm between rich and poor on our Fish Good EP. Another beautiful man to work with a voice that’s lost none of its power over the years.

Some people will only know his work with Massive Attack – he is the only guest artist to feature on all 5 of their albums – but his solo work is also stunning, from the beautiful Skylarking way back in 1972, via this environmental cut from 1980, to 2021’s album of love songs, Fools Fall in Love. Horace still has a voice of gold.

I first heard Ernesto singing in the shower. We were playing a few gigs at the beach resort of Villa Hessel in Argentina and he was staying there with his family. After swimming he’d shower off and unleash the weapon of his voice as he washed the salt away. Perhaps this is why I so love this recording of him not him in a theatre, belting out Bizet, but a simple, solo rendition of Ave Maria at the memorial for Nestor Kirchner. It was channeling the grief of a country not only for its leader (although his wife, Christina, had taken over at this point) but the fear that with Kirchner gone Argentina would return to an era of intolerance and persecution of minorities, the poor and women.’

You can also listen to Roll Up for the Crazy Sound of Hogchoker via Spotify, YouTube Music and Deezer.