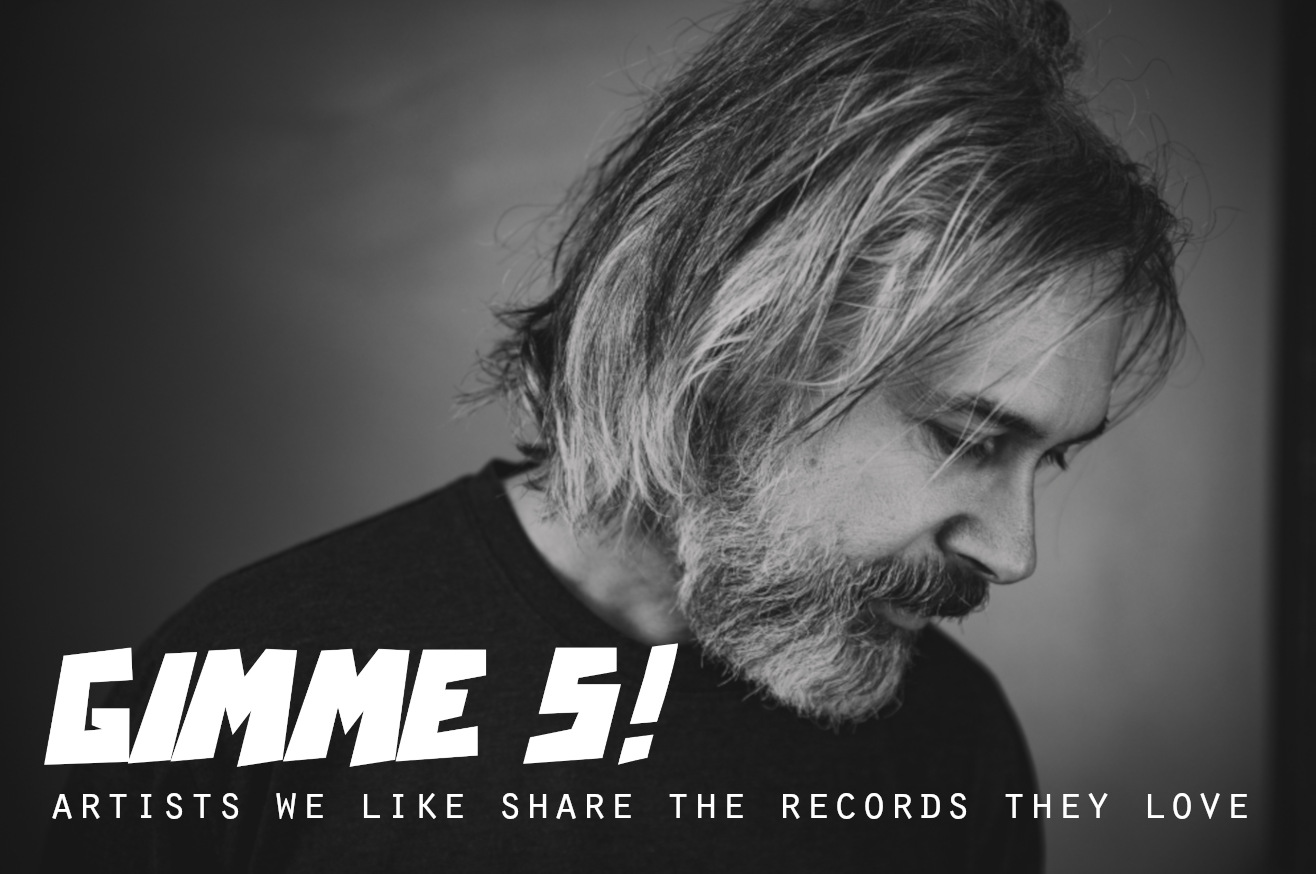 We started Gimme 5! out of curiosity and a desire to discover must-own records. We’ve been amazed by the lists so far. In addition to the picks, the best part of the feature has been the artists’ introductions and explanations. It’s a thrill to see artists share their passion and love for the music that inspired them. In fact, when the artist of this week’s Gimme 5! sent me his list, I literally got goosebumps from reading his words. I am talking about Rob Nesbitt. Rob played on the first BUM album Wanna Smash Sensation – an early nineties somewhat overlooked powerpop/pop punk classic. He then quit the band and spent the next 25 (!) years working on a Suitesixteen record. It came out last year, and it’s perfect. It is available in a custom triple gatefold, double vinyl package with a 50-page book and beautiful photography.

Rob’s list includes 5 records that were “monumentally important to him and perhaps overlooked.” Click below to read and listen. Rob wrote an extensive introduction to his list and explanations for each pick. He apologizes for it being long, but if you are like me, at the end of the post he leaves you wanting more. Thanks a lot for your generosity, Rob!

“My tastes are not unusual. Or surprising. Some might say they are “unrefined”, though I would argue the point if we met in person. I will make a brief assertion about this in the following sentences but I would literally need to teach a 6-week, junior-level college night class on this subject to get you to fully understand where I’m coming from.

When it comes to music I often like the thing that is most popular. Not BECAUSE other people liked it but because, IMO, (and that’s the last time I will type that), the thing that is the most popular is sometimes the very best. So I gravitate to “Best Of” albums when it comes to a lot of artists—Elton John say, or Queen. There is no Queen “deep cut” that is better than “Killer Queen”. There simply is not. You may like some other song more, or find something else more interesting (ridiculous!), but that would be personal preference and would probably include at least a whiff of musical snobbery.

I am speaking from an objective perspective here: “Killer Queen” is an apex moment of a band firing on every talent-cylinder they posses and hitting the target like .45 ACP to your pleasure dome. They simply can’t do any better. “Queens Greatest Hits” contains that one and “You’re My Best Friend” and “We Will Rock You” (which contains my 4th favourite guitar solo of all time). The greatest hits will do it for me for a lot of bigger name bands unless I identify with the them so strongly that I need to hear more. Or EVERYTHING!!

So yeah, a band’s best is often (among) their most popular. The same could be said for “Stairway To Heaven.” Not my favourite Led Zeppelin song (that would be “When The Levee Breaks”), but it is as far as they could go–could PUSH–while still remaining eminently palatable.

Anyway, I hope you get the point because I have to move on. Suffice it to say: I generally like the best stuff by the people who do it best. But I don’t think it would be very helpful (or interesting) for me to try and pick from all the MONOLITHIC records that helped shape who I am or how my record, “Mine Would Be The Sun,” sounds and feels. Those types of records don’t need my help in either promotion or proving how great they are. So for the purposes of this article I will try an offer up some records that were both monumentally important to me and are, perhaps, overlooked.”

“I was a mod in the 1980s so it was almost a sure thing that this record would get lot of attention from me. The music it contains is important, certainly, but it is the tangible aspect of this album that kept coming to mind as I was creating my solo record. Listening to music in the pre-digital age as a near-religious, ceremonial past time is well documented, but I want to state how important the totality of an “album” was back then: the paper. The printing. The liner notes. The extras (posters, lyric sheets, printed inner-sleeves…)–all of these things added to the richness of the experience.

This is my favourite album. Bar none. It’s a concept record that tells a story of teenage alienation. The original pressing of Quadrophenia came in a gate fold cover who’s paper had a very specific nap—almost like felt. It also came with a book that had pictures mods in it that (supposedly) helped tell the story of the record.
It’s influence on “Mine Would Be The Sun” cannot be overstated. When I began packaging my record I swore it would have a book and an incredibly tactile-rich paper for the cover.

“When I listen to music, especially something new to me, I almost immediately start trying to dismantle it. Figuring out the parts. How one section fits into the next and what chords or rhythms the musicians are suing to evoke certain reactions. Ultimately, and I often find the paths of the song are almost telegraphed—a mystery easily solved like a cheap dime-store crime novel.

When I heard this record for the first time I was almost overwhelmed to the point of total sensory confusion by the thickness of the sound of it. The ultra-layered harmonies and huge sounding guitars. The cascading vocals that moved in directions I didn’t expect: I simply could not figure it out and it sort of short circuited my brain. And yet none of it was wilfully obtuse—every push was a hook. Sugar-coated and bludgeoning.

James Broad—the man who WAS The Silver Sun—died in October, 2020.
He will be missed.
You should not miss out on this record.

“Two 17-year-olds make a demo in their parents house. They don’t have a drummer so they use a drum machine. The resulting music is so undeniable—despite all it’s sickly-sweet word play and over-blown teenage melodrama (or perhaps because of it?)–that the major labels come calling and a real band is formed around the duo to tour the big-time, arena-rock-ready album that used the demos as an important springboard. So much so that the drum machine parts are often left in.
The mix of DIY elements along with synths and crushing guitars made this an instant hit with me. The CD buying public? Not so much.

I saw the band on their first tour and their energy mixed with the fun-yet-earnest delivery of this material moved me to tears of joy.
If you can listen to a song like “Time Stands Still” and not be brought somewhere emotionally…I don’t know what to tell you.
They were KIDS!!”

“This is the moment where I minimize. Get small. Because I’m all about the details.
Not only is this not an album–it’s a 4-song 7″ single–and while I certainly love the song I’m about to talk about, it’s a single moment that matters.
I bought this record in December of 1989 knowing nothing about it. I personally was at a precipice creatively though I didn’t know it. I was already heading down the road that would create the architecture of my musical life and give birth to the songs I wrote for my band BUM’s 1993 album, “Wanna Smash sensation”. The Descendents were basically the centre of my musical solar system at this point so when I put the needle down on this single and heard the intro for the song “Only Of You” I knew this was something I was going to like. But then, 22 seconds into the song, a pairing of melody, chord and voice occurs that flipped a switch in me: As BJ Armstrong sings “I wish I could tell you…” the guitar plays an A chord to a B chord. The voice sings an E to a C# on the words “tell you”. Holding that C# into the B chord vocally creates a Bsus2 chord.
Heavy guitar mixed with this wide-open emotionality expressed by the suspended chord–This was the sound and feeling I had been waiting for.
That moment takes about 2 seconds but in that 2 seconds I found what I wanted to do with my life.”

“You know the saying, “Save the best for last” or whatever Vanessa Williams was singing about back in 1988? This is a perfect example of that. While Quadrophenia is indubitably my favourite album of all-time, the rest of these are not ordered in number of importance. If they were, TSAR’s self-titled debut would TOWER over the other 3 mentioned.
This record, produced by Rob Cavallo, is near-perfect. 10 impeccably crafted, hook-laden songs combining the power of rock and roll with the space-glam of The Sweet by way of Cheap Trick’s Monkees-child. Everyone who cares about melodically driven music with an edge should own this record. Period.