Australian psych-folk outfit The Uplifting Bell Ends (aka The Bell Ends) conclude their “Super Giant saga” with their new (fifth) full-length album, Super Giant IV. In the ten new original songs here, Chet Tucker, James French, Luke Moroney and Jack Whittingham revive bluesy country rock from the late 60s and early 70s. You’ll hear stories of travel, nature, isolation, love and longing for connection, written in the desert during the pandemic. The sound is melancholic, warm and atmospheric, for example beautifully reflected in That Old Familiar Feeling: ‘As the dust settles I start thinking // If we can put back the pieces ever again // I’m a man that doesn’t mind changing / / But if I can I can’t say when.’ Life is good Travellin’ Home this way: ‘Nah nah nah nah no // Hey hey hey hey // Oh yeah // Hey hey hey hey.’

Super Giant IV is out now digitally and on vinyl LP through Third Eye Stimuli Records.

In September we heard Rita Wilson’s Now & Forever cover LP featuring duets with Willie Nelson, Smokey Robinson, Elvis Costello and other big names, Aquarium Drunkard’s Lagniappe SuperSession featuring 33 artists interpreting the music of James Toth (Wooden Wand), Geoff Palmer’s version of Dee Dee Ramone’s Standing In The Spotlight album, the 15-track Sea Creatures compilation as a homage to the songwriting of Jeffrey Lewis, a sponsored Old Man cover by Beck that Neil Young was unhappy with, and previously we wrote about releases from Herman Hitson, Hayley And The Crushers, Crocodile Tears, Dangüs Tarküs and The Manges with some successful cover versions. We actually saw too many other cover versions come along, most of which were slow and subdued – apparently fall has has caught up with music too. Below is a selection of songs that haven’t yet received the attention they deserve.

I Just Wanted To See You So Bad || Cover: Quivers || Original: Lucinda Williams
On the flip side of their new single If Only, Melbourne four-piece Quivers cover a hidden gem of Lucinda Williams’ 1989 self-titled LP, sung by Bella Quinlan: “It felt so good to have a bit of a shouted call and response.” Out on red colored vinyl 7″ through Ba Da Bing!.

In 2022, not many artists can claim to have collaborated with Jimi Hendrix, James Brown, Joe Tex, Bobby Womack, Wilson Pickett, Jackie Wilson, Sam Cooke and many other big names, let alone release a new album more than 50 years after their debut. But look: American guitar player and singer Herman Hitson aka Hermon Hitson has survived a wild life – his biography calls him a recovering heroin addict, one-time inmate and snake-clearer armed with a flamethrower – and recently in two days he recorded the nine songs of Let The Gods Sing, unstoppable as if he were at the beginning of his career, although his unique dark voice betrays longevity. The experienced pioneer plays here alongside The Sacred Soul Sound Section – Will Sexton (guitar), Mark Stuart (bass), Will McCarley (drums/percussion), Al Gamble (organ) and Art Edmaiston (horns) – forcing everybody to get loose and then tight. The LP captures the adventurous musical spirit of Hitson, with a wicked groove and a mix of funk, rhythm & blues, soul, hard blues, all layered with psychedelia, all raw and authentic. You’ll hear new performances of some of Hitson’s best-known R&B tunes, like Suspicious (an original Hitson song attributed to Jimi Hendrix at the time), and he also re-covers Bad Girl (featuring garage rock legend Jack Oblivian on guitar and Marcella Simien on vocals), written by his longtime bandmate Lee Moses. The record colors wildly outside the lines, takes you on an exciting trip, and leaves you in awe.

Let The Gods Sing, produced by Bruce Watson and Will Sexton, is out now digitally, on CD and vinyl LP through Big Legal Mess Records.

Mo Troper is the kind of artist who writes songs like there is no tomorrow. Out of necessity perhaps, an overflow of creative juices. By now, Troper has found, or should I say created his own niche of first take lo-fi pop nuggets – power-, psych- and ’60s pop nuggets to be more specific. MTV may be my favorite Mo Troper record yet. It’s full of adventure and detours to explore. I’m pretty sure I Fall Into Her Arms is my favorite Mo Troper song yet. Subject to change of course, ask me again in a couple of weeks. Surely Troper will have released a new batch of hits by then.

MTV is out now through Lame-O Records.

Brooklyn, New York singer-songwriter Matthew James McKibben aka Kibby is back with his third full-length album in as many years. After Seance Rock (2020) and Blabracadabra (2021), he has now released Ta Da. As provocative and striking as the title and cover art are, so little is known about the artist. Anyway, the music speaks for itself: this is dreamy psych pop with jangling guitars, atmospheric synths and intriguing vocals, to be placed somewhere between Unknown Mortal Orchestra, Mac DeMarco, Ezra Furman and Whitney. The sound is warm, the melodies are clever and appealing, the lyrics are earnest and the production is quirky and sometimes off the rails, but that’s what makes this DIY project so fascinating.

Ta Da is out now digitally and on cassette through Forged Artifacts.

We haven’t written about music from Costa Rica before, but it’s about time. San Ramon trio Equus releases Caos, an EP with five raucous tracks that are just as surreal as their cover art. Francisco Sanchez (vocals, bass), Kenneth Chavarria (guitar, backing vocals) and Edward Rodriguez (drums) play bluesy garage rock laced with punk, psych and even metal influences. Not as chaotic as the title suggests, but quite diverse. Always heavy, energetic and enchanting, played tightly – very worthwhile.

Caos is out now digitally (self-released). Add to wantlist: Bandcamp

Joey Cook used to play in psych indie pop outfit Pomegranates, but currently records and performs as Joey Joesph – which I keep reading as Joey Joseph. Despite several releases preceding Do You Bongo, it is the first post-Promegranates work I’ve heard from Cook/Joesph. The record is hard to overlook though. Opener Bellezebub immediately grabs your attention with its Warm Sodaesque retro powerpop. From there on out, Do You Bongo is a delightfully weird mesh (mess?) of sounds and styles. There is proto punk, glam, power pop, synth pop, rock’n’roll, psychelic rock, and new wave. Psychedelic Baby Magazine sums it up as “rock & roll through a lens shaped by Saturday morning cartoons, half-remembered AM pop, and home-recording hero worship,” and that makes totally sense once you’ve listened to the record.

As such, you probably won’t like all of the songs on Do You Bongo, but the gems here (like Bellezebub, Little Brother, Rock & Roll Music, I Feel Nervous and Bongo 3) make the trip worthwhile nonetheless. Cool concept, cool execution.

In 2010, Australian folk-rock / pop-psych band The Frowning Clouds released their debut album Listen Closelier, which was followed in 2013 by the Whereabouts LP. However, the band had recorded more songs at the time, 8 of which ended up on Gospel Sound From The Church Of Scientology, a European tour cassette in a (quickly sold out) edition of only 100 copies. Good news: that tour tape, two tracks that never actually came out and a handful of non-album singles have now been brought together on the LP Gospel Sounds & More from the Church of Scientology – a total of 14 original tunes from the period 2011/2012. This 60’s inspired garage rock sounds just as contemporary, pure and delightful as the popular work of bands like The Growlers, Night Beats, The Murlocs and The Limiñanas – hopefully it will earn The Frowning Clouds just as much appreciation, that would be well deserved.

Gospel Sounds & More from the Church of Scientology is out now digitally and on vinyl LP through Anti Fade Records. 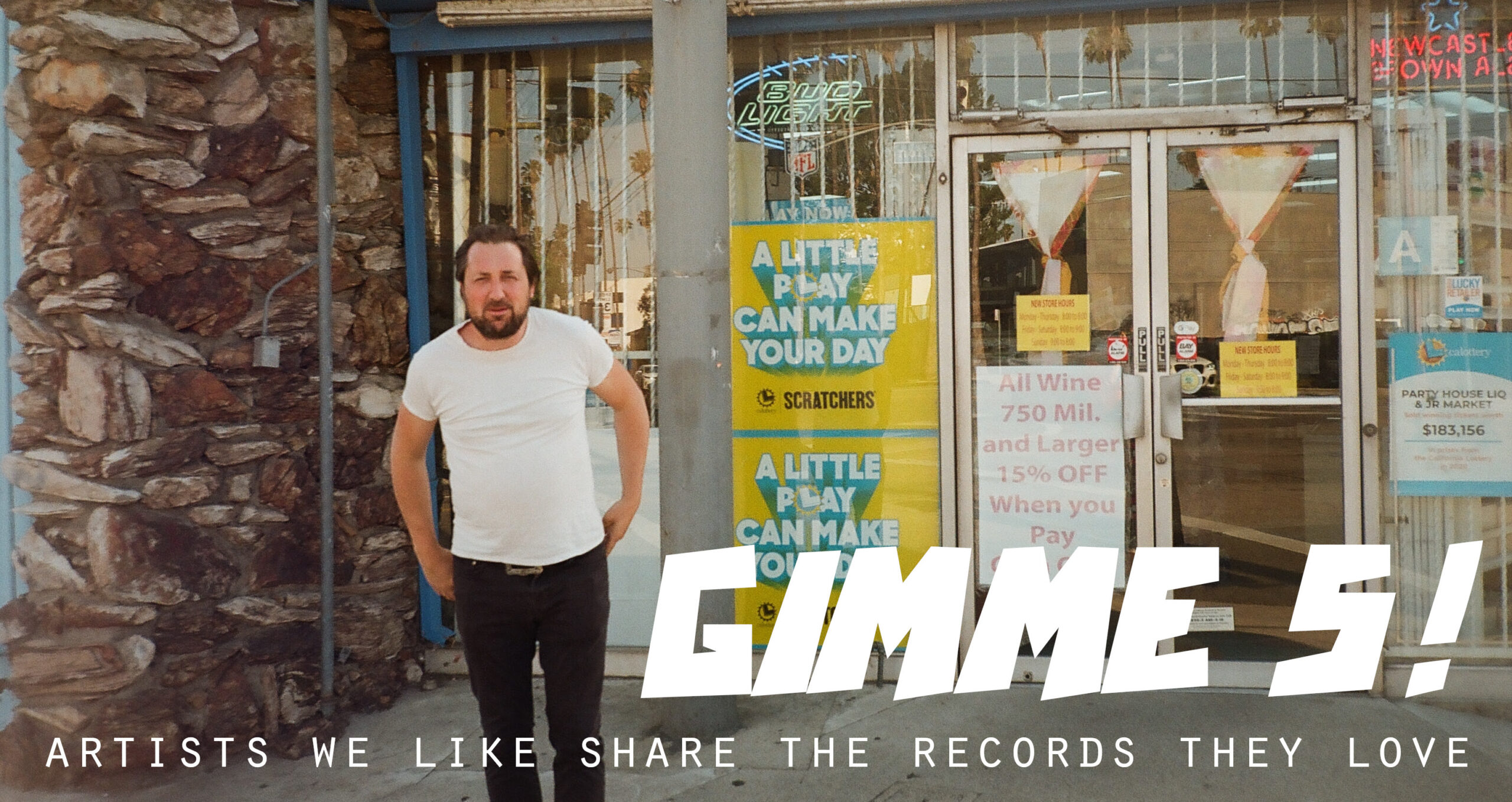 Depending on your frame of reference and location, The Walkmen were either wildly succesful in the ’00s or criminally underrated. I, for one, am a huge fan of the band’s discography. Unlike other bands, the Walkmen’s demise did not end the musical careers of its individual members. In fact, they continue to gather critical acclaim with their solo (see Hamilton Leithauser, Walter Martin, Paul Maroon, and Peter Matthew Bauer) and band careers (Matt Barrick with Muzz). A close look at all of these projects reveals the diverse talents and musical interests of the individuals that made up the Walkmen.

In anticipation of his third record (Flowers), we reached out to The Walkmen’s bass player Peter Matthew Bauer to provide a Gimme 5 feature. He kindly obliged, and his list is as diverse as I’d hoped it would be. Part of this has to do with his own record label (and management company) Fortune Tellers Music. The Flowers LP, which will be out September 23 on Fortune Tellers – pre-order now) is a reflection of the different artists Bauer works or has worked with. Currently, three teaser singles have been released and none of them sound alike, yet all of them are of interest. Whereas Skulls has hints of The Walkmen, Knife Fighter starts out as an acoustic folk song that grows into something bigger and more exciting along the way. That also applies to Miracles, a gorgeous and particularly powerful track where Bauer constantly builds and releases tension. Continue reading below to hear the song and discover Bauer’s Gimme 5.

Hoboken (New Jersey, US) four-piece The Special Pillow are back with a six-track psych folk / baroque pop EP with a 1960’s feel but a 2020’s connection. A slightly estranged but fascinating combination. How different would we listen to this sound without knowing its music history? “An empty slate // A really empty slate // Is really not so rare // And it’s really pretty great” (from title track Mind Wipe). However, we have to deal with first world problems. “Can you prove you’re not a robot? / Click all the boxes with traffic lights” (from Access Denied). Lyrics aren’t even necessary: Organic Panic could have been a forgotten soundtrack hit (love for the Bronx Zoo flamingos featured here!). Dan Cuddy (bass, vocals, moon guitar, keyboard, glockenspiel), Katie Gentile (violin, viola, vocals), Peter Stuart (guitars, vocals, electric sitar) and Eric Marc Cohen (drums, percussion, vocals) know how to surprise and captivate in every way.

Mind Wipe is out now digitally and on CD (self-released). Add to wantlist: Bandcamp