The five French garage rockers from Les Grys-Grys spent eight years working on their music before releasing their awesome self-titled debut album in 2019. Two years later, here’s the follow-up LP, To Fall Down, available next month through Norton Records. This new record is a bit heavier and more varied – more mature? – and imho even better than the debut. Stand-out tracks include the enthralling “ballad” Watching My Idols Die, the powerful sing-along So long, the raucous Milk Cow Blues cover (their “signature tune” at live shows), and the energetic closing title song. A successful addition to the discography with garage rock ‘n’ roll as conceived in the 60’s, which we will enjoy for a long time to come.

UPDATE: Bad news. On July 26, the band announced its end: “Le groupe Grys-Grys n’est plus.” Their music lives on.

Are you into poppy garagepunk like Outtacontroller, Mean Jeans, Mind Spiders and Jacuzzi Boys? If so, you may want to take note of Serials, a solo project by SF East Bay area based Dennis Stimac. He wrote the 16 songs off his new LP Mediocrity in a four month period (nov 2020 – mar 2021) at his tiny home recording studio. Stimac plays (or has played) in a  variety of bands that are more hardcorepunk oriented, and with Serials he records music that is “a little more mellow and not bound by any specific genre. Although its definitely punk rooted.”

Also, his recording ritual is quite unusual:  “I have a TV in my studio and I leave it on the Investigation Discovery channel while I write and record 24/7. Its true crime, murder type shows. Weirdly, It helps me write. I even leave it on while recording, I just turn the volume down.” This may explain some of the dark undertones in the music of Serials (“Mercury is about a super realistic dream where I got shot and killed in a 7-11 convenience store. The last thing i saw before everything turned black was laying on the ground staring up at the mercury flourescent lights flickering.”), but most of the songs on Mediocrity sound rather upbeat.  Take  a sample of some of my favorites off the album:  Bed Bugs (a song “about a girl withdrawing from drugs”), Stick Figures Gone Wild, Sleeping Pills And Antifreeze, and1994.

Mediocre is out now digitally, with an extensive backcatalogue of Serials to dive into at Bandcamp. Stimac also run a YouTube channel with local punk music and skateboarding videos from his hometown, Concord, Ca.

This Anxious Pleasers EP. Wow. I just can’t seem to stop playing it. Anxious Pleasers are a threepiece from Hamilton, Ontario. It’s the brainchild of guitarist/singer TJ Charlton of the TV Freaks (such a cool band), with Nathan Burger on drums (also of TV Freaks, and Flesh Rag) and Matt Ellis on bass (of Flesh Rag, Plasticheads, The Vapids, and his recent solo project you should definitely check out). The line-up sets a high bar in terms of expectations, but Anxious Pleaser effortlessly surpass those. My fingers automatically turn the volume up to 11 on songs like What Do You Care About and DUH! This is an exhilarating and insanely catchy punk record.  “We wrote and recorded the songs right before covid hit. We played a few shows and everything got put on ice but we decided to release it. It was recorded by the band in our old rehearsal space and mastered by Kenneth Roy Meehan,” Matt Ellis explains. It’s currently digital only, with all proceeds donated to Hamilton Encampment Support Network. A  very limited cassette release is available for pre-order, but I am confident punk labels are lining up to do a vinyl release as well. The future of the band is less certain, given the members’ other responsibilities and one band member moving west to Vancouver. 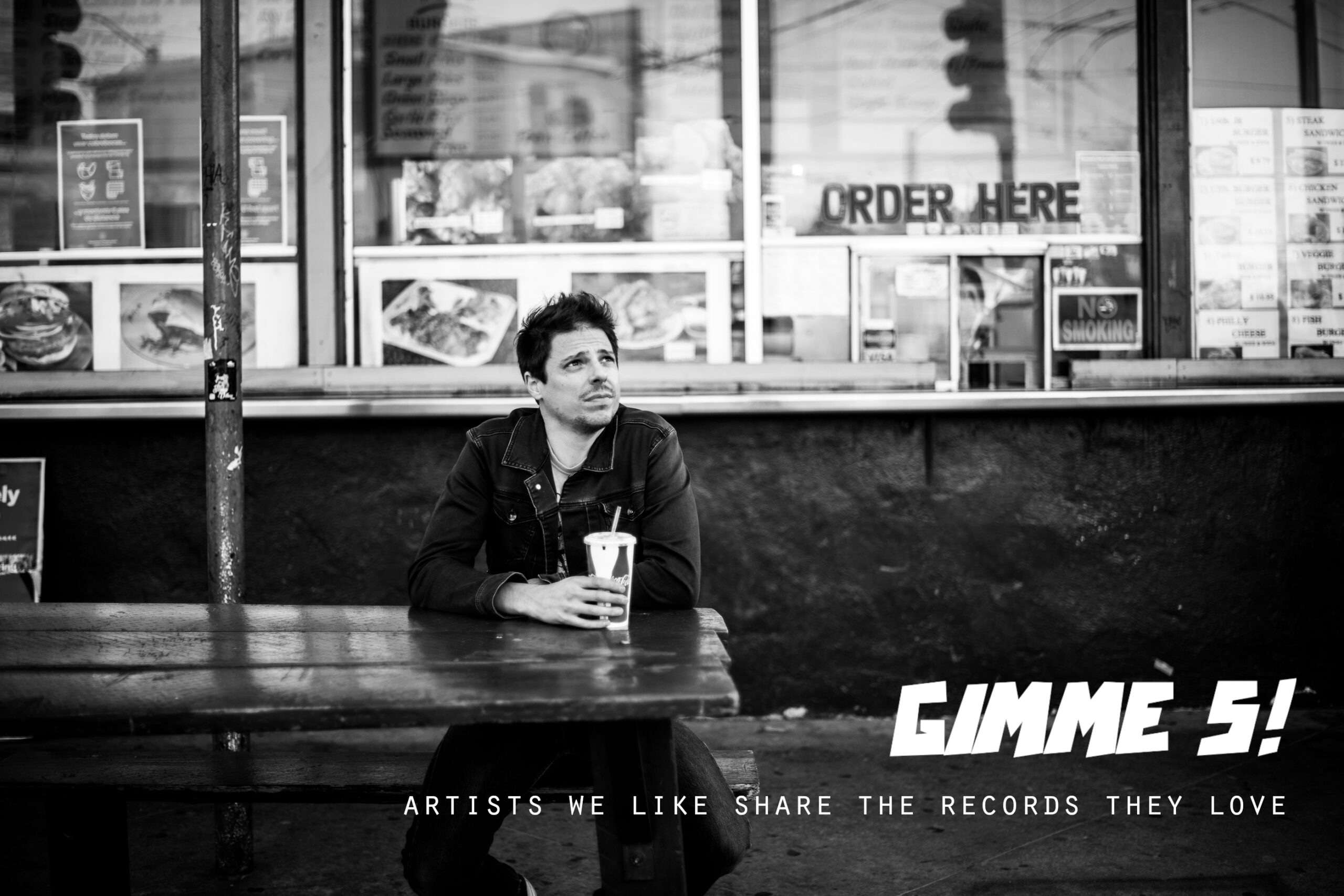 This week’s Gimme 5 features a multitalented artist who plays (or has played)  with Terry Malts, Smokescreens, Beehive and Jonathan Richman of the Modern Lovers. I am talking about Jake Sprecher, who made good use of his Covid induced boredom by purchasing a TASCAM 388 and recording a new solo bedroom-project as The Wind-Ups. The result is Try Not To Think, a 19 minute powerpop masterpiece  disguised as lo-fi garagepunk record. Of his previous bands, Try Not To Think is sonically nearest to the early Terry Malts stuff: just as infectious but louder and slightly slower paced. The songs have that deceptive songwriting quality that can easily be misinterpreted as simplism. In truth, it takes skill to write songs that are this straightforward and yet so memorable. To give you an idea, listen to the two prematurely released tracks off the record: Lockdown and Too Many Bibles. I’ll write a longer review near its June 18 release date – spoiler: there are a lot of killer tracks on this one. [post continues below]

Three O’Clock Rock is an after-school and summer rock & roll music program for kids and adults in Oakland, California. Students form bands, play shows, make records, and even go on tour. Today they are releasing their 3 O’Clock Rock at Sam Phillips recording Services, Memphis, TN album, digitally and on 12″ vinyl. This LP features original songs by 3 O’Clock Rock artists as well as cover songs by artists who recorded in Memphis. Not all played equally tight and often a bit off key, but all much fun, raw and primitive, with full dedication, as it should be in this kind of music. Listen below.

However, 3 O’Clock Rock has produced more fun music not found on this compilation album. That’s Kinda Kita is the debut release by The Fire Swords from Oakland, CA – an ode to their dog: ‘Kita does tricks // She knows how to sits’. This song by Aiden (guitar / vocals), DJ (drums), and Billy (bass / vocals) is so catchy that it has been singing around in my head for weeks. These kids may be young, but they rock!

On their 1980 album Songs The Lord Taught Us, The Cramps sang about The Mad Daddy. You could wait for a band to be named after that, and look, here’s Mad Daddy. Since 2015 this four-piece of misfits – Dolyn Clucas-Morris (vocals / harmonica), Elvis Palooka (bass), Liam Callow (guitar), and Matt Twist (drums) – from the Isle of Man plays high octane rock ‘n’ roll punk blues, and now they have finally released their full-length self-titled debut album. These are ten powerful, energetic, rocking songs of around 3 minutes long, intended for listening very loud. Out now digitally, on CD and green vinyl LP (self released). RIYL Oblivians, The Stooges, Daddy Long Legs, The Jim Jones Revue. Give It To Me!

About 25 years ago we were nerdy on time at the concert hall, so we saw Southern Culture On The Skids perform twice: the sound check and the real show. Camel Walk is still one of my favorite songs and new work always leads to a jump of joy. The band – Rick Miller on guitar & vocals, Mary Huff on bass & vocals, and Dave Hartman standing behind the drums – has been playing together for 30+ years, consistently recording and touring around the world. Good news: they have an awesome new album out called At Home with Southern Culture on the Skids (already released March 12, so I almost overlooked it, but luckily our hero Little Steven brought it to my attention by playing new track Run Baby Run this week, on episode 996 of his legendary Underground Garage radio show). The 11 tracks, including 2 covers – Sugar Town (written by Lee Hazlewood, first recorded by Nancy Sinatra), and Dear Mr. Fantasy (written by Jim Capaldi, Steve Winwood & Chris Wood, recorded by Traffic) – were taped and mixed by Rick In his living room and at The Kudzu Ranch. And that is also the feeling that the new album evokes: a successful living room concert, a cozy and laidback rock ’n’ roll party with catchy songs that make you smile and sing along. We would have loved to be there, twice.

Out now digitally and on CD via Kudzu Records. Add to wantlist: Bandcamp || Discogs || SCOTS