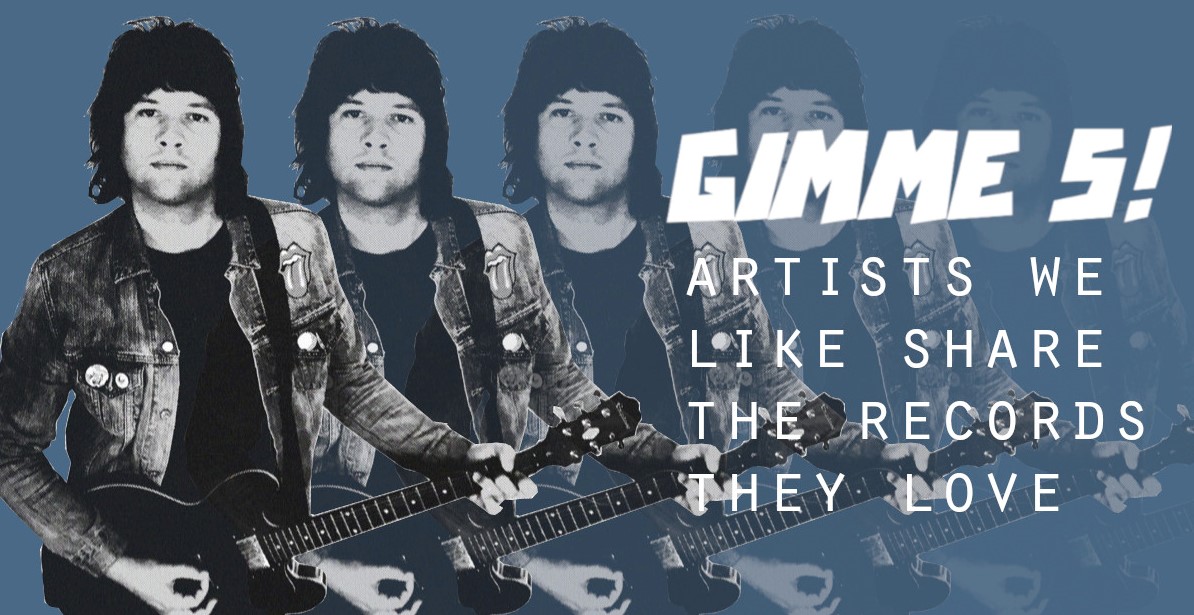 This week’s Gimme 5! features one of our favorite songwriters of the past decade, Brad Marino. Brad played in Rydells, The Connection, The New Trocaderos, and Tommy and the Rockets. In recent years, the multi-instrumentalist has been a prolific solo artist. In 2019, he released his debut Extra Credit, which was followed by an EP (False Alarm) and a tribute LP to the Ramones’ Subterranean Jungle in 2020. On June 4th he will release his third solo album in three years (update: Read our review here). It’s called Looking For Trouble and this will be a must own for any self-respected fan of powerpop & rock’n’roll. Pre-order the LP now at Spaghetty Town (USA), Ghost Highway (Spain), or Beluga Records (Sweden). Rum Bar Records has the CD-version covered.

Building up to its release, we asked Brad to share the albums that influenced Looking For Trouble.  Check out his 5 picks below. Spoiler alert:  Those influences are on full display in his latest hit single Even The Score.  Thanx a bunch, Brad! [continues below…]

Rolling Stones || Let it Bleed
“Everyone who knows me, knows I’m a big Stones fanatic. This record influenced “Looking for Trouble” not only as the Stones are one of my biggest influences but also because Keith did almost all the guitars, including slide guitar which he wasn’t known for playing much and never really did again. Looking for Trouble was my first foray into playing electric slide and while I don’t really know what I’m doing- I know what I thought sounded good and just used Keith as a reference- well if he can do it- so can’t I! Keith’s bass on “Live with me” greatly influenced my bass playing as well and I did “Even the Score” in Keith’s famous 5 string open tuning.”

Paul McCartney || Egypt Station
“Paul’s 2018 album was on heavy rotation when it came out. I’m not the biggest solo Beatles fan but this record really grabbed me for some reason. What I like about it is the songs are good but the production and attention to detail is still there from Paul. All the instrumentation- even something simple like adding a harmonica or an overdubbed Tom hit it just makes a good song- great. Paul’s also an awesome drummer and far as I can tell played a lot of drums on this record- so simple but so powerful.”

Pale Lips || After Dark
“This record truly rocks! Super fun, catchy RnR- Stripped down to the bone- which fits perfectly for these songs. It’s one of my favorite records of the last 10 years at least. I love the Chuck Berry guitar styles combined with the energy of the Ramones- Four girls who really know how to rock! Track this one down if you haven’t heard it yet!”

Bash & Pop, Anything Could Happen
“From 2017, this record has pretty much influenced me and my songwriting ever since it came out. The songs are awesome and range from raunchy, dirty blues influenced rock to Sweeter Pop stuff that sounds more like The Replacements. “On the Rocks” is great and “Unfuck you” is my favorite track!”

Eytan Mirsky || If Not Now, Later
“Eytan can write a tune. In fact, he’s written a lot of them, this album from 2019 was my first introduction to Mirsky’s music but I quickly went down the rabbit hole and started listening to his back catalog. I love the Nick Lowe-like wit and humor in the lyrics and the production is great. Different vibes give each song a different feel and really keep the album moving. Check out Eytan Mirsky!”

4 thoughts on “Gimme 5! Brad Marino Shares 5 Records That Influenced His New Record Looking For Trouble (out 4/30)”