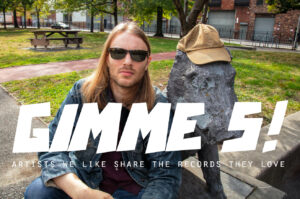 With Gimme 5! we take a peek into the collections of artists we admire. The premise is simple: artists WE like, share 5 records THEY love.

We are absolutely thrilled to present this week’s curator of Gimme 5!: Scott Davis. Scott is the main man behind Virginia Trance, who released Vincent’s Playlist last year – Niek’s favorite indiepop record of 2020. Scott also played in the psychelic rock band Psychic Ill’s. In his list, Scott challenges us to wander off the beaten path, and discusses the importance of an eclectic listening experience – which we love, and probably should do more often.

Click below to read and listen. Scott added short explanations for each pick. He even throws in his top 5 Lou Reed albums for good measure. We added YT video’s and Discogs links so you can add these records to your wantlist. Thanks a lot Scott!

Scott (Virginia Trance): “5 records to listen to in 2021, in no particular order. My first thought was to create a list of my top 5 Lou Reed albums, before deciding against it. After all, I already paid my homage to Reed on Vincent’s Playlist. But if I did the list would have been 1. Ecstasy 2. The Blue Mask 3. Set the Twilight Reeling 4. New Sensations 5. Hudson River Wind Meditations. But the list I did create is a mixed bag because an eclectic listening experience is crucial.”

“My personal favorite album by Mateo. Perhaps an all-time favorite. A beautiful mixture of guitars, synths, and hints of candombe. Mateo has been called the Syd Barrett of Uruguay. While I love Barrett, Mateo sits on a higher plane. Gripping both body and soul with two hands.”

“I don’t have a lot to say about this album other than I have never stopped thinking of Rogie since I first heard it. There is electric guitar played by a real person, small errors and all, along with unconventional approaches to percussion that fit just perfectly. The music is raw and electric.”

“There are no bad Felt records. In fact I almost made this “top 5″ list ALL Felt albums. But I did not want to be overbearing about it. Or too obvious. Now would I want to exclude the other 5 Felt albums. The Pictorial Jackson Review is not generally considered a high point for the group. It is after Maurice Deebank exited the group, leaving Lawrence at the helm. But it does feature 8 short and to the point gems with Lawrence’s usual wit and melancholy, Christopher St being my highlight. Plus the original pressings of the album sports long form lowkey jazzy flair courtesy of Martin Duffy.”

“I briefly lived in Arkansas not terribly far from where the Cates Brothers lived and worked in Fayetteville. This album is brimming with country-soul and country-funk tracks, with the occasional swamp rock vibe thrown into the mix for good measure. They were friends with Levon Helm who also played in their group for a short spell, which gives reason to why I found my copy of this lp Woodstock, NY.”

“This album features a super group of players. I originally came to it out of a love for the great guitarist Robert Quine (of Richard Hell & The Voidoids + Lou Reed’s early 80s band among other projects). He is not someone necessarily known for his subtlety but this album offers levels of restraint and nuance often lacking in this fast paced world, well maybe that’s a self-conscious critique.”